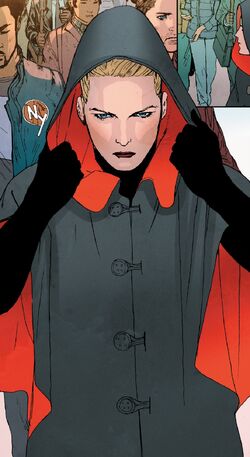 When a clone of the deceased Natasha Romanoff rebelled against her creators from the Red Room, she secretly activated three amnesiac clones of her sister-in-arms, Yelena Belova, that were being grown by the same program that gave her life.

After being sighted by Hawkeye while trying to keep a low profile, Natasha decided to have one of Yelena's clones impersonate her to mislead them. She sent this clone to the home of a former high-ranking Hydra officer that Hawkeye and the Winter Soldier were staking out.[1] She was effectively captured by the two heroes.[2] After failing to get any kind of information from Yelena's clone, the Winter Soldier let her go.[3] Natasha then had Yelena meet her up in a subway,[1] where she shot and killed her.[3]

Seemingly those of Yelena Belova.

Like this? Let us know!
Retrieved from "https://marvel.fandom.com/wiki/Yelena_Belova_(Clone_1)_(Earth-616)?oldid=6046889"
Community content is available under CC-BY-SA unless otherwise noted.