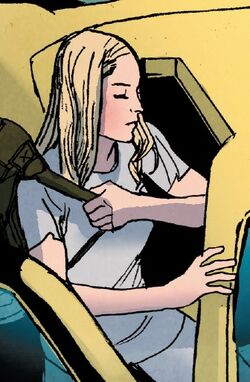 When a clone of the deceased Natasha Romanoff rebelled against her creators from the Red Room, she secretly activated three amnesiac clones of her sister-in-arms, Yelena Belova, that were being grown by the same program that gave her life.[1]

After being assigned to kill ex-S.H.I.E.L.D. agent Sally Blevins, Natasha instead saved her life, by having one of Yelena's clones take Blevins' place in her car,[1] and then detonated it while she was passing over the George Washington Bridge. The car then fell into Hudson River. Its remains and this clone's body were later found by the FDNY.[2]

Seemingly those of Yelena Belova.

Like this? Let us know!
Retrieved from "https://marvel.fandom.com/wiki/Yelena_Belova_(Clone_2)_(Earth-616)?oldid=6046892"
Community content is available under CC-BY-SA unless otherwise noted.