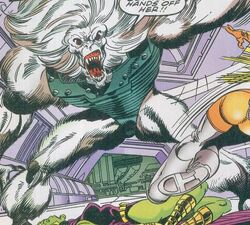 Yeti was an Inhuman, who had apparently undergone exposure to the Terrigen Mist, giving him an animalistic appearance and powers.[citation needed]

At some undisclosed point, Yeti joined the superhero team the First Line. During his time with them, he clashed with the Deviants in battle. Yeti tendency to fly into uncontrollable rages proved to be something of a drawback, however, and he often had to be calmed down by his teammate Rapunzel's prehensile hair. However, after an undisclosed tragedy involving Rapunzel, Yeti left the team and tried to return to the Inhumans' home, Attilan. [citation needed]

Yeti instead made a home in an abandoned temple in the Himalayas, where he lived like a hermit until he was approached by a Skrull woman called Korya, who seduced him to help her in the Skrulls' planned invasion of Earth. Yeti soon fell in love with her. [citation needed]

Yeti was on board the Skrull flagship during the attempted invasion. During the battle, Korya was killed and Yeti stood guard over her body, savagely striking the time traveller Cassandra Locke when she approached them. Taking Korya's corpse, he boarded an escape pod and returned to Earth, escaping the destruction of the Skrull armada. [citation needed]

Back on Earth, Yeti kept Korya's corpse in his temple, jealously guarding it. During this time, Yeti clashed with the original X-Men[1] and the Human Torch.[citation needed]

Yeti possesses great superhuman strength, as well as razor sharp claws and teeth that enable him to rend most materials.

Yeti possesses superhuman strength, enabling him to lift over 75 tons.

Yeti is prone to going into animalistic, savege rages. He is only able to be snapped out of these rages by the sight of something pretty to distract him.

Like this? Let us know!
Retrieved from "https://marvel.fandom.com/wiki/Yeti_(Inhuman)_(Earth-616)?oldid=5423485"
Community content is available under CC-BY-SA unless otherwise noted.