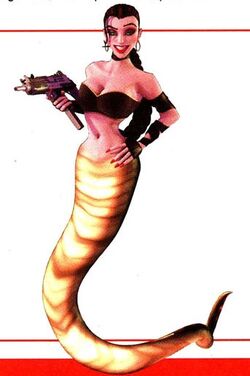 Yith was the daughter of Melusine, and was as such the descendent of the Elder God Set.[1] According to a prophecy, the "seventh child of Set" (meaning a seventh generation descendant) would usher in a a new golden age for the Serpent Men. By Ian McNee's calculations, the mother of that new dark prince could be either Yith, or the Lemurian Nagala.[1] Yith would become a mercenary[2] and an assassin.[1]

In the aftermath of the War of the Serpent, Yith was among the many recruits joining the Department of Occult Armaments.[5]

Her tail is capable of lifting 2 tons

Like this? Let us know!
Retrieved from "https://marvel.fandom.com/wiki/Yith_(Earth-616)?oldid=5871231"
Community content is available under CC-BY-SA unless otherwise noted.