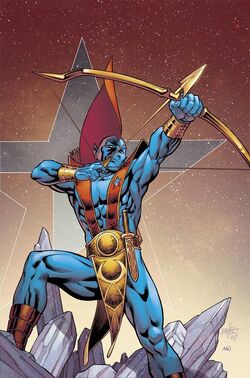 The Guardians believe in returning in like kind! If met with deadly force -- we WILL retaliate with same!

Yondu Udonta was a game hunter of the primitive Zatoan[citation needed] tribe of humanoid beings who were native to Centauri-IV, the first planet system to be colonized outside of the Sun's solar system; the colonization took place some time during the 29th century. Intimidated by Earth's superior technology, most Centaurian tribes established peaceful relationships with the settlers.

Yondu's tribe, however, migrated from their ancestral forests to the less accessible plains in order to avoid contact with the outworlders. 200 years after the Centaurians' first contact with Earth, a ship bearing Vance Astro arrived on Centauri IV, using an antiquated mode of star travel. Finding that Earth had beat him to his destination centuries before, using advanced star-drive engines, Astro set about to perform his reconnaissance mission of the planet, despite the fact that it was now obsolete. While performing his geophysical survey, Astro came across Yondu, who was in the midst of his ritual of manhood ordeal.

Although Yondu tried to avoid contact with the outworlder, the planet-wide attack by the extraterrestrial Badoon brought the two men together. The Badoon massacred the entire settlement and began circling the planet, trying to eradicate the scattered tribes of native Centaurians. With the first evidence of hostilities, Astro took Yondu aboard his survey ship and set out for the nearest known planet in the Centauri trinary star system.

Due to the antiquated nature of Astro's ship, however, the two were swiftly overtaken by the Badoon. Intrigued by the ancient vessel, the Badoon did not annihilate it upon sight, but instead captured it and took its passengers captive. The two were taken prisoner under Badoon escort to the Badoon's base of operation on Earth (the Earth having been recently conquered). On Earth, the two were taken before Drang, head of the Badoon militia, but managed to escape.

They soon encountered two other fugitives of the Badoon invasion: Charlie-27 of the Jupiter colony, and Martinex of the Pluto colony. Banding together to battle Badoon oppression, the four founded the Guardians of the Galaxy.[3] For the next few years, the four survivors attacked the Badoon's outposts in the solar system, being at one time assisted by the Thing, Captain America and Sharon Carter.[4] With aid from the time-travelling Defenders, they managed to repel all the Badoon from Earth's dominion.[5] Having secured the freedom of their people, the Guardians found themselves unable to fit in with postwar civilian life and left earth to explore space and safeguard the galaxy.[6]

Yondu eventually left the Guardians and returned to Centauri-IV to repopulate the planet, where he was married with two children and became leader of a tribe.[7] Years later, when communing with Anthos, Yondu was ordered to travel to the past in order to prevent his ancestor from ruining the fate of the Centaurian race. Yondu's ancestor possessed the Herald's Urn, an artifact that held the devastating Power Cosmic, and recklessly planned to sell it. Yondu was sent back in time by Anthos and met his vile, infidel, and indecent ancestor, wondering how such a man could be the legendary Yondu Udonta, whom he was named after.[8]

Yondu tracked his ancestor, aiming to protect him from Sav'rrk, a mercenary who was hired by the M'Kraan to steal the Herald's Urn.[9] As Yondu's ancestor opened the Herald's Urn to unleash its powers to defeat Sav'rkk, the two Yondus were transported to Galador, where they spent hours getting to know each other better, forming a bond.[10] The duo grew even more fond of each other after they evaded a M'Kraan fleet. His ancestor reconnected to his Centaurian roots due to Yondu's influence, learning how to control the Yaka arrows. In return, Yondu started to see life beyond faith and traditions, becoming more violent and ruthless.[7] This ultimately led Yondu to brutally kill Sav'rrk when his ancestor's life was at risk. Unfortunately, Yondu was fatally injured by Sav'rrk as well. After Yondu's death, his ancestor hid the Herald's Urn in Galador and decided to honor Yondu's life by becoming a hero, acting for the best interests of the Centaurian race.[11]

Yondu possesses no superhuman physical powers, but is a natural mystic, like his entire tribe. Yondu possesses an intuitive "sixth sense" that permits him limited empathic relationships with other lifeforms. The higher the lifeform the more limited is his empathic potential.

Additionally, Yondu possesses an intuitive and rather mystical rapport with nature, particularly with his own world, but also with any world that still possesses natural wildlife. with this rapport, he can sense incongruous elements (foreign bodies or substances) or focus on specific elements within the whole (such as the location of a given plant). He is also sensitive to mystical beings and forces and is able to detect their presence and activities without effort. By going into a trance, Yondu is able to replenish his own inner strength by communing with natural forces.

Yondu is an above average physical specimen of his race. He has slightly more endurance than the average human male and is about 1.5 times as strong as a human. Yondu can lift about 375 pounds. An apprentice hunter, Yondu is proficient in the use of bow and arrow. His ability to whistle with a range of four octaves aids his archery (see Weapons, below). The native Centuarian language is a system of grunts, clicks, and whistles, but Yondu has managed to master the English language, although it is painful for him to speak for too long without resting his throat.

Like this? Let us know!
Retrieved from "https://marvel.fandom.com/wiki/Yondu_Udonta_(Earth-691)?oldid=6465497"
Community content is available under CC-BY-SA unless otherwise noted.