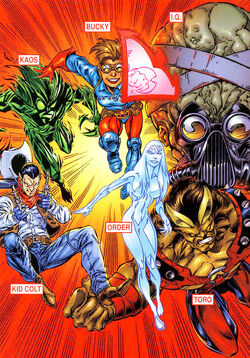 The Young Allies were reformed but on the Heroes Reborn world created by Franklin Richards called Counter-Earth. The Avengers and Fantastic Four return home to Earth-616 , but the planet suffers without the teams to protect it. One or two of Allies share code-names with heroes from the 616 team but have no relation to them. The team first comes in contact with the Redeemers, who were backed by the U.S. government and work with the Thunderbolts.[citation needed]

The Redeemers of Counter Earth was lead by Captain America but due to amnesia he had forgotten his time on the other Earth with the Allies Bucky. The battle was caused by the Allies when they created a fake chemical weapons scare in Latveria in an attempt to force the ruler of Counter Doctor Doom to distribute food and medicine in a fairer way. When the team left, Bucky was left shocked that Captain America would believe she would really use the weapon, which made Captain America lie to Dr. Doom about the canister being hidden.

The team some time later encountered the Thunderbolts themselves on their home world, while a rift was threatening to destroy both worlds. The Thunderbolts returned home but Jolt stayed behind to work with the team.

The recent events to take place on Counter-Earth involved the reality hopping team the Exiles who were there stop Proteus, who was in their teammate Morph's body. Proteus at first tricked the the Young Allies into fighting the Exiles. The Young Allies they later found out the truth when Proteus was enjoying torturing the Exiles. Proteus appeared to be winning, but two cosmic entities known as "O" and "Kay" tore Proteus away from the Exiles saying "that they've been waiting for him". They they then supply Proteus with an army of nuclear weapons.

Empress Dorma and Proteus soon meet, resulting in Proteus taking Dorma's crown and drying up Atlantis, and killing her and all her soldiers. The Exiles with the help of the Young Allies arrived at Atlantis. Proteus launchs the nuclear weapons but with luck, Kid Colt and Jolt stop the nuclear weapons without setting them off. Proteus believed he was still winning but as he still had Dorma's crown but Blink rigged it with a behavior modifier. The device made Proteus to believe he was Morph. The Exiles then teleport back to Panoptichron and sent the last of the nuclear weapons into space. The Young Allies then thanked the Exiles for saving their world and left for the next reality.[citation needed]

Like this? Let us know!
Retrieved from "https://marvel.fandom.com/wiki/Young_Allies_(Heroes_Reborn)_(Earth-616)?oldid=6443154"
Community content is available under CC-BY-SA unless otherwise noted.