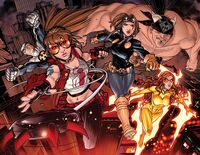 The group that is contextually known as the Young Allies first assisted each other when the Bastards of Evil attacked New York City.

During the initial scuffle between the two group, the Bastard known as Warhead detonated himself at the site of the World Trade Center, killing thousands.[1]

After the event, each of the five young heroes independently decided to investigate the identity of the Bastards. Araña and Nomad teamed up with El Toro, also teaching him that fatal violence is unacceptable.

Meanwhile, Gravity and Firestar learned from Electro that it was almost historically impossible that Aftershock was his daughter.

The Allies eventually defeated the Superior, thanks in part to certain members of the Bastards turning on him after the true nature of their powers were revealed.

In the end, Nomad began to suggest that the team formally unite under the banner of Young Alllies. Surprisingly, almost all the other Allies rejected this idea, and Toro may have not only because he didn't understand what she was saying.

It remains to be seen if the Allies shall remain an unofficial team, merely assisting each other in other capacities, or if they will eventually unite as a single force.

Retrieved from "https://marvel.fandom.com/wiki/Young_Allies_(Modern)_(Earth-616)?oldid=5552901"
Community content is available under CC-BY-SA unless otherwise noted.