Fictional History of the Young Allies 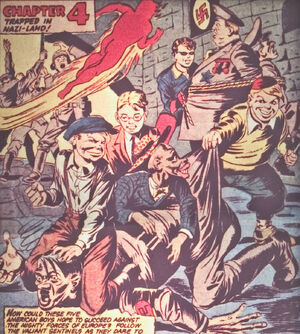 During the early days of World War II the United States military commissioned Timely Comics to draw comic books that were in support of the war[1]. One of these were based on the Young Allies a group of young adventurers that formed from Captain America's Sentinels of Liberty Fan Club. These stories were fictionalized versions of actual adventures of the Young Allies. The stories were greatly embellished, and the Allies were featured as younger parodies of themselves.

For a full account of the group's actual history see the Factual History of the Young Allies.

The Young Allies were a group of patriotic American youths who all met as members of Captain Ameirca's Sentinels of Liberty fan club. The original members included Captain America's sidekick Bucky, the Human Torch's sidekick Toro, Brooklyn brawler Knuckles O'Toole, the brainy Jeff Sandervill, overweight Tubby Tinkle, and "Whitewash" Jones, who according to the others played a mean harmonica and an even meaner Watermellon. The group was not without their foibles, with Bucky and Toro constantly clashing with each other over leadership, or whose mentor was the better hero. Tubby was always concerned about eating, and Whitewash was easily scared and his lack of intelligence often got the group into jams more often than not. They still managed to function as a team, however, and eventually overcame these adversities.

In their first recorded adventure, the Young Allies came to the aid of Agent Zero, a British spy who was being chased by Nazi spies led by the Red Skull. The group failed to prevent Agent Zero from being captured, but travelled into Nazi Germany to rescue her. During the rescue mission, the Young Allies bested not only the Red Skull, but also humiliated Adolf Hitler and Hermann Göring before fleeing Germany. They were pursued across Europe, but managed to find safety once they crossed over into Russia and travelled to China. There the team was caught in the middle of a Tong war until they were rescued by the Human Torch and Captain America who helped the Young Allies and Agent Zero return to America safely.[2]

In their next adventure, the Young Allies ran into an Imperial Japanese spy named Khan while playing in New York City. The group then followed after Khan and his men as they fled to Canada. From there the Allies lost them as they escaped to Alaska and collapsed from fatigue. Brought to the Yukon to recover, the Young Allies recovered and went to Alaska to warn the authorities. There they prevented Khan and his invasion force from invading North America through a secret tunnel dug to Alaska from Mongolia[4].

[7]In 1943, Nazi operative the Ambassador of Terror succeeded in murdering a group of good will ambassadors from the United States who were scheduled to go to the country of Bonara to secure a rubber deal with the country. Hearing this, the Young Allies convinced President Roosevelt to be allowed to go instead. While in the South American country, they become targeted by the Ambassador, but end up killing him in battle and secure the rubber deal with the ruler of Bonara. Back in the United States, the Young Allies came to the aid of Ling Toy, a Chinese-American immigrant whose boyfriend Ching Wing who was apparently killed discovering a secret Japanese tunnel to America. The Young Allies and Ling Toy were then targeted by the Serpent who was personally selected by Emperor Hirohito to prevent the Allies from learning about the tunnel. However the youthful heroes managed to avoid all attempts on their lives. They rescued Ching Wing, who was still very much alive, and they destroyed the tunnel before the Japanese could use it to invade America[8][9]. Later, Jeff invented a model for a new bomber to be used in desert warfare in Africa. When presenting it, the Young Allies were kidnapped by Nazi agents who then stole the plane and attempted to fly to Germany. The Young Allies forced the plane to land in Africa instead and they managed to escape the Nazis. Fleeing to Algiers, they assisted French Resistance fighters and Allied Forces in liberating the area from Nazi control. Returning to the United States, the Young Allies then pursued Japanese agent the Whip who stole the designs for a device to test demolition explosives. This brought them all the way to Tokyo where they were once more captured by the Imperial Japanese army. They broke free with the plans, landing another humiliating personal defeat to Hirohito, and leaving the Whip to commit suicide for his failure as they fled back to the United States[10].[11][12][13].

In 1944, the Young Allies overheard a sailor talking about sensitive military information to some spies. They board the ship to prevent it from being attack but fail to prevent it from the attack and are taken prisoner by the Nazis and brought to a concentration camp in France. The Young Allies manage to escape from captivity and manage to fight their way back to the United States. Back home, the Allies then participated in a demonstration of a bomber in flight. However, their plane was hijacked by Japanese spies led by Captain Osaki who hoped to use the American plane to bomb American military bases. The Young Allies managed to avoid being dropped with the bombs and retake the ship from Osaki[14][15].

In one of their more gruesome cases, the Young Allies clashed with Japanese scientist the Head who was beheading key members of the United States military and resistance movements in the Philippines in order to reanimate their severed heads and learn military secrets. The Young Allies travelled to Japan where they killed the Head and put his victims out of their misery before fleeing back to the United States. After a bunch of American soldiers were nearly killed by bomb rigged watches, the Young Allies trace them back to Nazi inventor the Mad Mechanic and clash with him in the Swiss Alps. The youths succeeded in destroying the Mad Mechanics insane inventions, including a robot army he hoped to use to attack Allied Forces[16]. Later, the Young Allies sneaked aboard an American vessel which brought them into India. There they were sequestered by the military until they could be returned home. However, the group soon clashed with Indian mystic and Japanese sympathizer Tehru the Master Magician and foiled his attacks on Allied Forces in the area[17][18][19].

On June 5, 1944 the Young Allies help the authorities capture notorious criminal Killer Bane who is executed for his crimes. However, Bane is resurrected by a scientist's formula. Bane then uses the same formula to resurrect other executed criminals and go on a crime spree. The Young Allies quickly put an end to the undead criminals when they realize that they are vulnerable to fire and Toro uses his flame powers to burn them alive[20].

Back home in the United States, the Young Allies prevented Nazi spies from stealing a supply of Radium. However, their leader Baron Krugg was irradiated by a massive dose of Radium and mutated into the Green Death. He then went on a murder spree which the Young Allies stop when they bury the Green Death and his men in a mine. The group is briefly turned against each other when Japanese sympathizer and psychologiest Dr. Wilton Wilkes and a team of Japanese spies from using an insanity ray on the group. They manage to shake off it's effects and stop Wilkes from using the device on a massive scale[21][22][23][24][25].

The Young Allies were then brought to an American controlled island on the South Pacific where Japanese Prince Shinto had trained children to be suicide bombers to try and retake the island. The Young Allies worked together to shut down the attack. Returning to the United States, the Young Allies then shut down the Shiv's counterfeit war bond racket[26]. Shortly after this mission, Bucky and Captain America were seemingly killed battling Baron Zemo[27]. New York Yankees bat-boy Fred Davis Jr. was then chosen by President Truman to replace James Barnes[28]. It is unknown if the any of the Young Allies outside of Toro were aware of this replacement[29].

With World War II having come to the end, the Young Allies returned to the United States and focused on fighting normal criminals. In New York City they put a stop to the crimes of Big Boy Bates a criminal with a childish personality, and stopped the murder spree of were-mummy Karr the Mummy[30].

[31]In 1946, the Young Allies were forced to kick Jeff out of the group when he was increasingly rude to the entire team. They were unaware that Jeff was participating in an initiation to get into a school fraternity. However, when Jeff and a classmate were captured by Terror Tate, the Young Allies rescued him and learned the truth, after which Bucky invited him back on the team[32].[33][34]. Shortly thereafter, Whitewash and Jeff left the team for reasons that are unspecified.

What followed were a series of mundane adventures for the remaining Young Allies. While out sailing they got stranded on Devil's Island where they helped rescue heiress Patricia Van Dyke from mobster Devil Dan[35][36][37]. Next Knuckles participated in a soapbox derby race where the winner was to be awarded college tuition. When rival racer Warren Lewis hired a gang to prevent Knuckles from participating in the race, the Young Allies fought along side their friend to make sure he made the race. Knuckles ended up winning the race fair and square, and Lewis was punished by his father[38].

In 1947, the Young Allies were on a manhunt for comedian Joe Diller, who had snapped after being fired from his job for not being funny. The Young Allies captured Diller before he could murder all his intended victims[39][40]. In a similar case, the Young Allies apprehended Derko the Clown, who was similarly fired for not being funny and also went on an insane murder spree[41]. They latter assisted Detective Tom Lanson in capturing Moose Mulligan and his gang[42]. Soon after, Bucky was nominated boy of the year and was appointed to be mayor of New York for a day. When Toro was framed for a jewellery store robbery and arrested, the Young Allies worked together to clear their friends name[43].

The Young Allies disbanded shortly thereafter, likely due to the retirement of Bucky and Toro from super-heroics the rest of the team drifted apart.

Retrieved from "https://marvel.fandom.com/wiki/Young_Allies_(WWII)_(Earth-616)/Fictional_History?oldid=5598658"
Community content is available under CC-BY-SA unless otherwise noted.