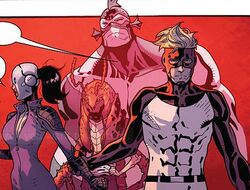 Originally assembled by Coat of Arms as an examination of superheroism art project.[1] The group was largely motivated by Melter's desire to be real heroes, but hindered significantly by unclear and conflicting ideals including Executioner's Punisher-style ruthlessness, Big Zero's racism and violent tendencies, Egghead's psychopathy and hedonism, and Coat of Arm's distorted view of ethics. Only Melter and Enchantress showed much interest in actual altruistic heroism.

The team began calling themselves the "Young Avengers", but were only active as superheroes a short time before being confronted by the real Young Avengers.[2] The original Young Avengers offered the possibility of recruitment after individually vetting each member.[3] The Young Avengers gave mixed reviews; membership was only offered to Coat of Arms and Enchantress, leaving the rest of the team under Melter's leadership but still under the supervision of the Young Avengers. However, Wiccan learned about Enchantress' origins and links to Loki, and she was expelled from the Young Avengers Headquarters shortly after arriving.[4]

The Young Masters continued to lay low after the Siege of Asgard and the fall of Norman Osborn. The team was also compromised when Enchantress became weak and ill after the death of Loki.[6]

Following the departure of several members, Egghead and Executioner received a mysterious new benefactor and carried out a recruitment drive for new members, bringing in Mako, Black Knight, and Radioactive Kid.[8]

Taking a new headquarters at an abandoned Hydra base in Pennsylvania purchased from Devlin DeAngelo, the team decided to hunt down and verify the death of Bullseye. Finding his corpse, the group was attacked and defeated by Lady Bullseye.[9]

They then attempted to murder Doctor Octopus, but were stopped by the Teen Brigade. In the aftermath, the Black Knight deserted. She ended up sleeping with Ultimate Nullfier, and gave him a S.H.I.E.L.D. file leaked to the group by their benefactor.[10]

After attempting, and failing, to recruit the reborn Kid Loki,[11] the Masters planned a final assassination: Kristoff Vernard the regent of Latveria.[12]

The Young Masters then acted under the Masters of Evil in Bagalia and are supervised by Constrictor.[citation needed][13] Most younger villains seem to have been recruited along with all former members.[14] Occasionally they are dispensed to perform some of the Masters of Evil's dirty work, but they primarily relax and play inside their base, the Snakepit, in Bagalia.[13]

Retrieved from "https://marvel.fandom.com/wiki/Young_Masters_(Earth-616)?oldid=5552919"
Community content is available under CC-BY-SA unless otherwise noted.