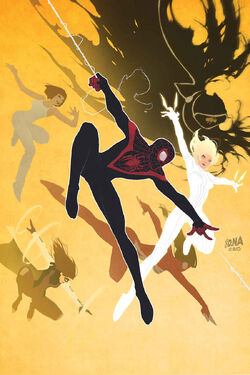 After forming an alliance to stop Roxxon Corporation[3], Spider-Man, Spider-Woman, Cloak, Dagger and Bombshell decided to remain a team.[4]

In the wake of the near-destruction of the Earth at the hands of Galactus, Tony Stark decided to disband the Ultimates, but he encouraged the young heroes to keep fighting. Spider-Woman decided to turn her team into the next generation of Ultimates, the Young Ultimates.[5]

Together with the X-Men, the Young Ultimates witnessed as S.H.I.E.L.D.'s Triskelion fell at the hands of several heroes who hailed from a parallel universe in retaliation to S.H.I.E.L.D.'s own attacks against their Earth. This clash of realities was the consequence of a phenomenon known as an incursion which ultimately caused both universes to collapse and come to an end together with their inhabitants.[6] Since then, the universe was recreated. It can be presumed the Young Ultimates returned to existence as well.[7]

Retrieved from "https://marvel.fandom.com/wiki/Young_Ultimates_(Earth-1610)?oldid=5792931"
Community content is available under CC-BY-SA unless otherwise noted.