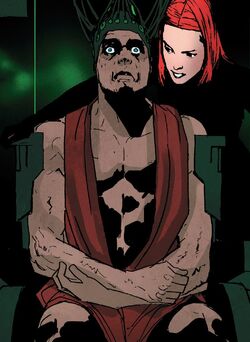 Epsilon Red was a Red Room psychic operative whose purpose consisted in mantaining a telepathic bond with all the Black Widows without their knowledge in order to back up their memories inside his own mind. If one of the Black Widows died, the Red Room could clone her, and transfer memories of her original self through Epsilon Red.

When the Red Room created a clone of Natasha Romanoff following her death, Ursa Major was appalled they would only give her a selected few of the original's memories to make her loyal to the Red Room, effectively depriving her of her memories as a hero. He managed to convince Epsilon Red to break protocol in exchange of letting him pet his fur, resulting in Natasha's clone being secretly given all of the original's memories.

After finding out about the Red Room's cloning program, Natasha's clone manipulated Epsilon Red, and made him erase the memories of three clones of Yelena Belova she later used as part of her plan to take down the Red Room.[1]

Once Natahsa openly turned against the Red Room and attacked their base from within, she killed all clones save for one of Yelena Belova and another of Orphan Maker. Epsilon Red transplanted the memories of the originals to the cloned bodies. Natasha then shot Epsilon Red in the head so he could find freedom in death, for which he thanked her before she pulled the trigger.[2]

Telepathy: Epsilon Red appears to be a powerful psychic who can mantain undetected a continuous link with several women at the same time, and copy their memories into his own mind. He can also transplant these memories into other bodies, or erase them altogether.[1]

Like this? Let us know!
Retrieved from "https://marvel.fandom.com/wiki/Yurgei_Ivanov_(Earth-616)?oldid=5609534"
Community content is available under CC-BY-SA unless otherwise noted.