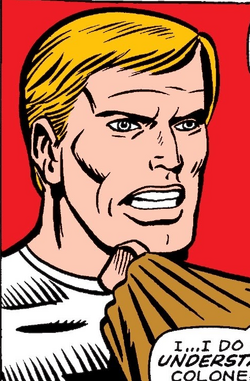 Yuri Brevlov was a Russian intelligence agent. He and Nick Fury had apparently met during WWII.[2]

He was sent to return the Missing Link, after the communist leadership had decided he could be duplicated and used as a soldier. After his ship was shot down by Nick Fury, he allied himself with S.H.I.E.L.D. in order to return the Hulk to the USA.

He briefed them on the mission to head into Afghanistan to capture the Hulk. He introduced them to their new teammate Ursa Major before sending them off.[1]

Brevlov's name has since been found on a list of S.H.I.E.L.D. agents of questionable motives, trusted within Hydra.[3]

Like this? Let us know!
Retrieved from "https://marvel.fandom.com/wiki/Yuri_Brevlov_(Earth-616)?oldid=5047522"
Community content is available under CC-BY-SA unless otherwise noted.