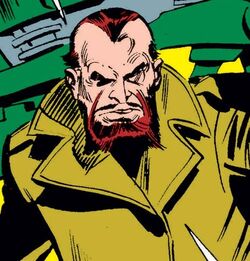 General Yuri[1] Brushov, reputedly the greatest military mind in the Soviet Union,[2] was invited by Colonel Ling to witness the Red Guardian's prowess and Ling's weapon the Psychotron[3] in a volcano base. Ling wanted to use the Psychotron along with Russian atomic submarines, but Brushov was not as convinced.[2]

Meeting the Red Guardian, Brushov wished to see the Red Guardian battling Captain America, and his dream came true when the Avengers bursted into his secret base to rescue Ling's prisoners Black Widow, Hawkeye and Hercules. The Widow convinced Brushov that she had defected to Russia, so she was allowed to join them.[2]

Ling helped the Guardian defeat Captain America, but the Guardian disliked his methods. Then, Ling detected the Widow sabotaging the Psychotron and shot her, but the Guardian, who loved her, stopped the bullet. Meanwhile, Hawkeye released himself and surprised Brushov shooting him an arrow. Brushov fell on Ling, spoiling Ling's second shot. This and several other accidents caused Ling's base to explode.[2]

Brushov probably died in the fire, as he has not been seen since.

Brushov was considered the best Russian military genius of his time.[2]

Like this? Let us know!
Retrieved from "https://marvel.fandom.com/wiki/Yuri_Brushov_(Earth-616)?oldid=5891818"
Community content is available under CC-BY-SA unless otherwise noted.