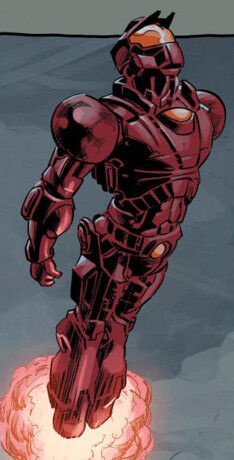 Yuri Ivanovich (Petrovich) Bezukhov (Russian: Юрий Иванович (Петрович) Безухов) was the son of Ivan Petrovitch. He was taken away from his father by his mother to protect them from the Russian government when Ivan refused to work for them; however, his mother was killed and Yuri was captured by the government. Ivan was informed that Yuri had been killed as well. The government agents claimed to be Americans to make Ivan hate the Americans; in reality, they were Russians secretly training him to hate Americans enough to become their agent. Nine years later, he was rescued from the camp. When he returned to Russia he assumed the role of the Crimson Dynamo and began working for the government.

Yuri was sent on a mission in America as the new Crimson Dynamo. He was supposed to capture Black Widow and bring her back to the Soviet government along with another defector. In actuality, Natasha was a good friend of Yuri's father Ivan. Yuri also learned his father was alive.[2] His group captured Natasha and her former KGB trainer Bruskin and attacked and captured the remaining Champions of Los Angeles at their founding ceremony.[3]

Upon returning, he was deemed 'a miserable failure' and demoted to working in a Siberian prison camp.

The armor was assigned to a new agent, Dimitri Bukharin.

Yuri used the Crimson Dynamo Armor Mark III. Since he only used it for one mission, it is unclear if it had received any upgrades from Nevsky's design.

Like this? Let us know!
Retrieved from "https://marvel.fandom.com/wiki/Yuri_Petrovitch_(Earth-616)?oldid=6483206"
Community content is available under CC-BY-SA unless otherwise noted.