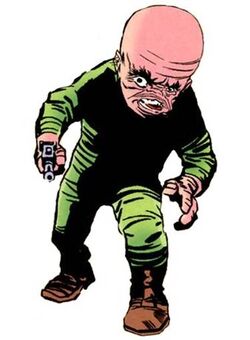 Yuri Topolov (Russian: Юрий Тополов) was a Soviet scientist and the first foe of the Hulk. Working with radiation at a Russian missile site had mutated him into a large-headed dwarf. Though his body was deformed, his mind was enhanced to a genius-level intellect.[1]

Under the auspices of the Kremlin, Topolov have sent a Soviet spy named Igor Drenkov to the United States to steal the secrets of the Gamma Bomb. Though Igor was captured, he managed to transmit a message to the Gargoyle, informing him that the American's experiments with gamma radiation created a monstrous being known as the Hulk. Topolov then became obsessed with the Hulk and decided that he must either kill him or bring him back to Russia as a symbol of his power.[1]

Boarding a rocket-firing submarine, the Gargoyle journeyed to the United States and snuck into the American military base. Encountering the Hulk and Rick Jones, the Gargoyle incapacitated him with a gun designed to sap the will of an opponent. He brought the unconscious Hulk and Rick Jones back to Russia, but when they arrived, he discovered that the Hulk had reverted to his human form of Doctor Robert Bruce Banner. This revelation was devastating to the Gargoyle, who longed for nothing else than to look normal. Banner told him that he was familiar with cases like him, and that he could cure his deformity, though the treatment would also mean that the Gargoyle would lose his enhanced intellect.[1]

Banner began treating Topolov and succeeded in curing him of his condition. Topolov was so grateful that he turned against the Soviets and managed to destroy several Soviet generals by detonating the military base where he worked, enabling him to "die like a man." [1] However, he passed his deformity on to his son, Gremlin.[2]

Yuri's death may have been a deliberate fake as he later turned up alive, having been frozen by the USSR in cryogenic sleep near the end of the Cold War alongside some other agents. Yuri and the rest were accidentally woken up in modern day and ended up fighting The Order.[3][4]

The Gargoyle employed a pellet gun of his own invention that sapped the will of its targets, rendering them unconscious.

Like this? Let us know!
Retrieved from "https://marvel.fandom.com/wiki/Yuri_Topolov_(Earth-616)?oldid=5252636"
Community content is available under CC-BY-SA unless otherwise noted.