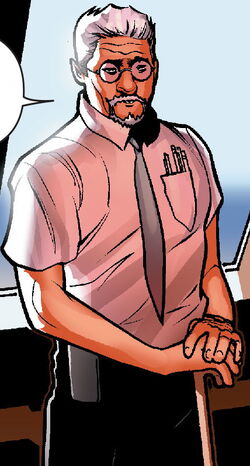 Yuriko Takiguchi was a robotics engineer for Stark Industries. Along with fellow scientist Tamara Hashioka, he developed the SJ3RX robotic construct, designed specifically to combat the menace of the giant, rampaging monster known as Godzilla. Yuriko's grandson Robert stole the SJ3RX and renamed it Red Ronin.[1]

In 2009, Yuriko was recruited by X-Club to help them discover how to reverse the effects of M-Day. They first went to 1906, to discover how the modern mutant population came to be, by taking blood samples from Doctor Nemesis' parents and then study them in the present. Takiguchi thought they were Russian agents trying to reclaim the island for Russia. In a panic, Takiguchi then unleashed the Leviathan.[2]

During the events of Utopia, X-Club managed to reactivate Asteroid M, which the X-Men declared a sanctuary for all mutantkind. However, Yuriko passed away soon after.[3]

Like this? Let us know!
Retrieved from "https://marvel.fandom.com/wiki/Yuriko_Takiguchi_(Earth-616)?oldid=6095518"
Community content is available under CC-BY-SA unless otherwise noted.