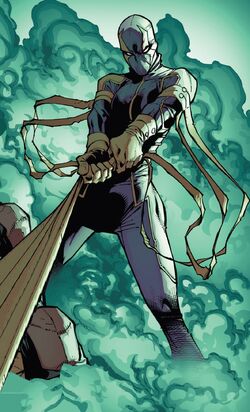 The Yuri Watanabe you know? She wasn't real. That Yuri was a story I made up, a lie I told myself--The good grandaughter I thought I wanted to be. Do you know what a wraith is, Spider-Man? It's a wisp, a trace, a ghost--The fading memory of someone who's gone. There's a reason I took the mask back so easily after giving it up. I didn't understand that fully until I killed a man last night. Yuri Watanabe would have been horrified by what I did. But you know how I felt? I felt free!

As a child, Yuriko Watanabe was inspired to join the police by her grandfather, Kenneth Watanabe, who received the NYPD Medal of Honor. Her father, John, was an officer as well, but when she was serving in the army, he was convicted of accepting bribes.

Later in life, Yuriko became an NYPD captain and supporter of Spider-Man who investigated a Gang War between the Maggia and Mister Negative, the appearance of the new Hobgoblin and other criminals.[3]

Some time later, using Mysterio's equipment and that of other villains, Yuriko became the new Wraith, disguised as the ghost of Jean DeWolff and using a mask of the Chameleon to further conceal her true identity. With this, Yuriko began fighting criminals and intimidating them.[4]

When her activities became notorious, her subaltern Carlie Cooper started to investigate and managed to discover Wraith's real identity as Yuriko. After helping Spider-Man and Anti-Venom defeat Mister Negative, revealing him as the philanthropist Martin Li, Cooper convinced Yuriko to temporarily give up her career as a vigilante, also giving her advice on how to cover her tracks better. Yuriko took a leave of absence from her police duties and left New York for a while.[5]

Later, Yuriko began working with Carlie to uncover the true identity of the Superior Spider-Man. Taking her vigilante moniker back, Wraith accompanied Carlie in going to Grand Tauró where they chased Antoine Morant, a banker of notorious criminals, searching for information about the secret bank account of Superior Spider-Man.

Carlie and the Wraith caught up with Morant, who was shredding documents out of fear. Before the last could be destroyed, Carlie caught the document, discovering that it actually held information on all of the equipment and technology for the Arachnaughts and the order for the Spiderlings, all of which was coming from the secret account of Otto Gunther Octavius. With this, Carlie was one step closer to the evidence she needed to unveil the secret of Superior Spider-Man.[6]

After Carlie was kidnapped by the Green Goblin, Yuriko investigated Otto further, hoping to find information on Carlie's whereabouts. She confronted Otto during the Goblin Nation attack for info on Carlie, but was knocked out by the transformed Carlie.

She aided the Avengers and Cardiac against the Goblin Knight, assisted by Spider-Man (who was Peter Parker again).[7]

A while afterward, Yuriko and the NYPD surrounded an abandoned building where Tombstone and his men were prepared to open fire on the cops. While Spider-Man helped her and the police take down Tombstone, her mentor, Teddy Rangel, was shot in the crossfire and taken to the hospital where he eventually died from his injuries.

To her outrage, Tombstone was released from prison by one of his customers, Judge Howell, and she received photographic evidence from Mr. Negative of Howell's involvement with Tombstone, but the chief of police denied the evidence. As the Wraith, she and Spider-Man went to a construction site containing Tombstone's men and evidence against Howell. Spider-Man questioned her methods (as she used one of the henchmen's anti-tank missiles to open a vault), to which she told Spider-Man that as the Wraith, she is not bound to the rules of a cop that Yuriko is bound to.[8]

Yuriko then angered the chief of police by arresting Howell without contacting the CSI, claiming to be using her evidence from an "anonymous source." Howell requested to talk to her at Ryker's. On the way there, Spider-Man revealed to her that Hammerhead and Goblin King were interested in her precinct.

During her meetings with Spider-Man and Howell, she expressed her anger at how "the system" operated. Mr. Negative informed her that Hammerhead and Goblin King were meeting at the Empire Royale to discuss who would take over Tombstone's turf. Wraith and Spider-Man took down Hammerhead and his men, with Spider-Man continuing to question her morality.[9]

Spider-Man then spotted Yuriko getting info from Mr. Negative about a breakout that was about to happen at Ryker's Island. He and Wraith went over to stop Black Cat and the Enforcers before the breakout could occur. She took down the Enforcers and found that Howell had been stabbed during the breakout.

Spider-Man found Wraith with a gun after hearing a gunshot, standing above a wounded Tombstone. In truth, she had been framed by one of Mr. Negative's men. She confronted Mr. Negative after he failed to make a deal with the Ringmaster, but he in turn revealed that he knew her secret identity, as he had realized that the Wraith would show up with Spider-Man to any crime boss meeting which Martin had informed Yuriko of.

The next day, the chief told her that her career was over and that Howell died from the stab wound, which wouldn't have happened if she had taken it slowly as the chief had told her. That night, she and Spider-Man went after the Circus of Crime but realized that Mr. Negative had set her up once again, and she had fallen for it despite Spider-Man's warnings. Out of anger, she killed one of Negative's men, claiming that Yuriko was dead while the Wraith lived.[10][1]

During the gang war in the third precinct, she confronted Mr. Negative for a final time, determined to kill him. Negative escaped while Wraith defeated his men. Spider-Man arrived to try and convince her to change her ways, but she punched him in order to go after Mr. Negative. Negative corrupted a group of bystanders, but before she could fight them off, Spider-Man grabbed Wraith to avoid damage to the brainwashed civilians, knocking her out and webbing her up, and defeating Mr. Negative. When he returned to where he had left her, Yuri had escaped the webbing and taken only her mask, leaving behind the rest of the costume.[11]

Yuriko wears a suit that uses Mr. Fear's Fear Gas and tentacles that are elastic to tangle opponents.

Like this? Let us know!
Retrieved from "https://marvel.fandom.com/wiki/Yuriko_Watanabe_(Earth-616)?oldid=6077968"
Community content is available under CC-BY-SA unless otherwise noted.