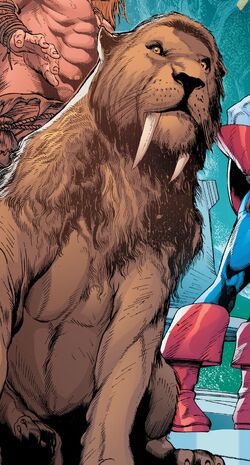 Zabu is the last known Smilodon (or saber-tooth tigers).[3][2] Living in the Savage Land (an artificial preserve for prehistoric wildlife), Antarctica, he is the companion of Ka-Zar.[2]

Except for those living in the Savage Land, Smilodon (or saber-tooth tigers) became extinct during the Pleistocene period, the time during which the Earth experienced its last so-called Ice Ages.

Subsequently, Zabu was found by the wolf Zagah, who brought him as food for his mate Thana, but she adopted him instead, letting him grew among her cubs Fheta (who admired Zabu) and Jhet (the eldest,[4] who grew to resent Zabu and hate Fheta for admiring him).[2]

In a struggle for supremacy,[4] after Jhet killed Fheta, Zabu was forced to slay him in combat, estranging him from his adoptive parents.[2]

Afterwards Zabu wandered the Savage Land on his own, teaching himself how to survive as he grew to adulthood.[4]

A year after his birth, Zabu first encountered the female who became his mate,[4] who became pregnant with Zabu's litter.[2]

Maa-Gor, leader of a tribe of primitive Cavemen living in the Savage Land, had been leading his people in exterminating saber-tooth tigers, nearly rendering them extinct in the Savage Land. Maa-Gor and his men killed Zabu's mate. Enraged, Zabu tracked them down and found them about to attack the young boy Kevin Plunder, who had come to the Savage Land with his explorer father, Lord Robert Plunder. Maa-Gor and his men had just killed Kevin's father, and Maa-Gor probably would have then killed Kevin had not Zabu suddenly leapt on Maa-Gor from behind. Zabu scattered the tribesmen except for Maa-Gor, who, unseen by Zabu, was about to kill the tiger with his spear. But before Maa-Gor could do so, Kevin Plunder shot Maa-Gor in the shoulder with his father's gun.[5]

Zabu realized that Kevin had saved his life, and the two became companions. They went to dwell in the Place of Mists, a region where Maa-Gor's tribe refused to set foot. There, Kevin grew to manhood, protected from all dangers by Zabu. Maa-Gor's people referred to Kevin as "Ka-Zar," which meant "son of the tiger."[6]

Zabu remained Ka-Zar's companion when Ka-Zar became an adult, the strange gases within the Place of Mists retarding Zabu's aging, having him still in the prime of his life by the time Ka-Zar was an adult.[2]. After Ka-Zar again made contact with people from outside the Savage Land, he often brought Zabu with him on his journeys to the outside world.[7] Zabu also accompanied him to the home dimension of the Sheenarians.[8]

Along with Ka-Zar and his wife Shanna O'Hara Plunder, Zabu escaped the destruction of the Savage Land at the hands of the alien Terminus.[9] They later returned after the High Evolutionary restored the Land.[10]

Zabu accompanied Ka-Zar to New York City when Parnival Plunder teamed up with Thanos[11] and was also with Ka-Zar when he returned to New York and was wrongfully accused in a shooting incident.[12] After returning to the Savage Land, Ka-Zar and his family were forced to temporarily leave their home[13] but they soon returned and had reunited with Zabu.[14]

Sometime after this Ka-Zar attempted to elicit help from Jessica Jones, who was operating as a private detective at the time, to help track down Zabu who had gone missing, which she declined to involve herself with.[15] Zabu was at some point reunited with Ka-Zar but then found himself physically fighting Hercules who defeated and hog-tied him as part of a reality television show he was involved in, Ka-Zar and Shanna quickly tracked him.[16] Zabu was then returned to them after a party in New York City celebrating the success of Hercules' TV show.[17]

When the cosmic force known as the Phoenix Force returned to Earth, it staged a contest to determine its next host, and Shanna, accompanied by Zabu, was one of many individuals summoned to the White Hot Room for it. The Phoenix empowered the assembled champions and had them fight each other in trials by combat.[18] After emerging victorious from fighting Devil Dinosaur[19] and American Eagle,[20] Shanna and Zabu were pitted against Red Widow.[1] The battle was even, but it was ultimately interrupted when Echo, one of the fallen contestants, was chosen by the Phoenix. Emerging from the ocean floor, Echo absorbed the portions of the Phoenix within Shanna, Zabu and the Red Widow before doing the same to the other participants in the process of fully becoming the Phoenix.[21]

Due to the unusual gases from the Place of Mists:

Excellent tracker, has a special rapport with Ka-Zar and a unique fighting style the two have developed.

Larger and stronger than is usual for his species.[2]

Large fangs and sharp claws on all four paws.

Like this? Let us know!
Retrieved from "https://marvel.fandom.com/wiki/Zabu_(Earth-616)?oldid=6502750"
Community content is available under CC-BY-SA unless otherwise noted.