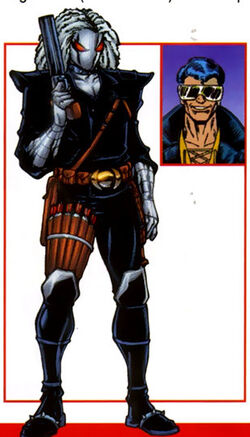 Moonhunter was mesmerized into the service of Dremund the Demon Druid. His silver plated body armor made him the perfect wrangler for Dredmund's pack of werewolves. He encountered Captain America and Doctor Druid when they were searching for Cap's missing pilot, former Man-Wolf John Jonah Jameson.[2]

After Dredmund was defeated, John Jameson chose not to return to the Avengers' mansion staff. Zachary Moonhunter took his position as Cap's personal pilot, appearing occasionally through the end of Cap's struggle with the deteriorating Super-Solider Serum and temporarily death.[3]

Like this? Let us know!
Retrieved from "https://marvel.fandom.com/wiki/Zachary_Moonhunter_(Earth-616)?oldid=5161444"
Community content is available under CC-BY-SA unless otherwise noted.