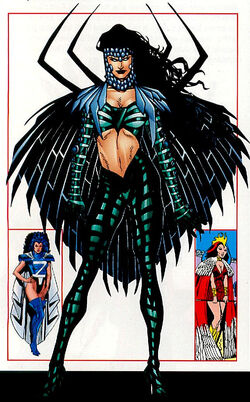 Hear me, servitors and foes both! Magneto is no more! Zaladane rules supreme!

Zaladane was the high priestess of Petrified Man, the sun god worshiped by the Sun People. She led her people in a war in Garrok's name to conquer more of the Savage Land. However, an unnamed British sailor five centuries ago had visited the Savage Land and drank a strange liquid there that endowed him with immortality and superhuman powers. Over the centuries it also slowly gave him the physical appearance of the stone-like Garrok. Returning to the Savage Land, he proclaimed himself to be the god Garrok and used his powers to destroy the weapons of Zaladane's army, thereby ending the war. Shortly thereafter Garrok died after having been immersed in the liquid that had given him his powers.[1]

Zaladane claimed that her real name was Zala Dane and that she was the sister of Lorna Dane, the mutant Polaris. It is not known how Zaladane came to live in the Savage Land, a prehistoric tropical jungle existing on the Antarctic continent, nor how she became queen and high priestess of the Sun People, one of the many races inhabiting the Savage Land.

Many months later, Zaladane painted the chest of a captive named Kirk Marston with oil made from the Petrified Man's ashes, causing Marston to transform into the Petrified Man, whose consciousness supplanted Marston's. Zaladane then became Garrok's principal aide as he attempted to bring peace to the Savage Land by forcing its people to live in a city he had constructed. However, the jungle lord Ka-Zar and the X-Men wrecked their plans.[2]

Years later, Zaladane became the assistant of the superhuman being called the High Evolutionary in his successful effort to restore the Savage Land after its destruction by the alien Terminus. Zaladane allied herself with the Savage Land Mutates, Savage Land natives who had been given superhuman powers through artificially induced mutation.[3]

Following the High Evolutionary's departure Zaladane amassed an army of Savage Land natives, who were mentally controlled for her by the Savage Land Mutate named Worm. She then had Lorna Dane abducted and brought to the Savage Land. Zaladane then stole Lorna's superhuman powers over magnetism and infused them into her own body. Ka-Zar and members of the X-Men battled and defeated Zaladane and her forces. Her army was released from Worm's control and Lorna regained her freedom. Sometime later she regained her magnetic powers.[4]

Months later, still in command of the Savage Land Mutates, Zaladane launched an attempt to control all the magnetic forces of the planet Earth. Nick Fury, director of the international law enforcement agency S.H.I.E.L.D., Ka-Zar, Magneto, and the X-Man Rogue joined forces to stop her. Magneto executed Zaladane.[5]

Zaladane is a master sorceress who can manipulate the forces of magic for a variety of effects, including the control of the minds of others and limited energy projection. Zaladane once stole and temporarily possessed Polaris' superhuman power to manipulate magnetic forces.

Zaladane has claimed to be a mutate (a person in whom mutation has been induced through artificial means) but it is not known what superhuman powers this mutation may have given her.

Zaladane is a formidable hand-to-hand combatant and is trained in the combat skills of the Sun People.

Zaladane possesses the normal human strength of a woman of her age, height, and build who engages in intensive regular exercise.

Like this? Let us know!
Retrieved from "https://marvel.fandom.com/wiki/Zala_Dane_(Earth-616)?oldid=6465297"
Community content is available under CC-BY-SA unless otherwise noted.