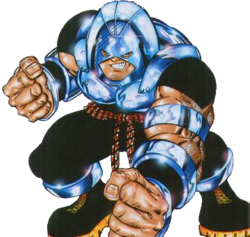 Hair
Brown
Unusual Features
In his transformed state, J2 has a tremendously large and defined muscular build
Origin
Origin
When young Zane Yama was bullied by school bully Miller Hallendale, he discovered that he had inherited the powers of his father, the unstoppable Juggernaut, a reformed hero and member of the X-Men. (Human)
Reality
Earth-982
Creators and Appearances
Creators
Tom DeFalco, Ron Frenz
First Appearance
What If? (Vol. 2) #105
(February, 1998)

When young Zane Yama was bullied by school bully Miller Hallendale, he discovered that he had inherited the powers of his father, the unstoppable Juggernaut, a reformed hero and member of the X-Men. J2 lived most of his younger life without the guidance of his father, who had gone missing on a mission with the X-Men.[2]

His father's powers, received from the mystical Ruby of Cyttorak, transformed their wielder into a large behemoth with enchanted armor, granting amongst other things, super-strength and enhanced endurance. It was through an act of will that Zane could transform himself into a similar appearance, with armor which he had to fashion himself, also granting him super-strength and heightened endurance. A constant trademark of his costume was his father's flannel shirt tied around his waist.[2]

Calling himself J2, Zane was offered membership to the group called A-Next, themselves also children of heroes, notably, the Avengers. Although J2 was also offered membership with a group known as the Uncanny X-People, led by an older Jubilee, he turned them down, albeit remaining friends with the team and assisting them on a few occasions. Similarly, Magneta, the self-styled mistress of magnetism, offered J2 a spot amongst the new villainous group she was forming, but she was also turned down.[4]

J2 later learned of the reason behind his father's disappearance from Cyclops, leader of the X-Men. Juggernaut was being held prisoner by a villain called Nemesus in an alternate dimension. Thanks to the Sorcerer Supreme Doc Magus, J2 was able to locate his father and then rescue him.[5]

Later announcing his retirement, Juggernaut was content to let J2 to carry on his legacy, having proven himself worthy of the powers he wielded.[6]

J2 possesses various superhuman attributes similar to those of his father.


Physical Transformation: J2 has the power to physically change his normal form into that of a hulking physical powerhouse similarly the way his father is able to. During this process, approximately 17 inches in height and 665 lbs of muscle and bone tissue are added to his frame. The source of this additional mass isn't known.


Superhuman Strength: J2 possesses superhuman strength of undefined limits. While the maximum amount of weight he can currently lift isn't clearly known, it is known that it exceeds 75 tons but no more than 100 tons. However, as a teenager, J2's body and powers aren't fully mature and his strength is expected to increase substantially over time.


Superhuman Stamina: J2's mystically enhanced musculature produces considerably less fatigue toxins during physical activity than an ordinary human. While the limits of his stamina aren't known, he can physically exert himself at peak capacity for at least several hours. As with his physical strength, J2's stamina will likely increase considerably as he grows into maturity.


Superhuman Durability: J2's body is highly resistant to all forms of physical injury. He can withstand tremendous impact forces, powerful energy blasts, high caliber bullets, exposure to extremes of temperature and pressure, and falls from great heights without being injured. As with his other powers, J2's ability to resist physical injury is likely to increase over time.

J2 is a good hand to hand combatant, having received extensive experience as a member of the Avengers.

J2 is still a teenager and his powers aren't as developed as those of his father. Currently, if he exerts himself for too long, he will uncontrollably revert to his normal form, this also happens when around an hour has passed while he has remained transformed.[2][1][7]

When J2 transforms into his superhuman state, he gains a mystical set of helmet and armor that resembles that of his father, though the coloring is different. The helmet grants him immunity against telepathic probing and assault.

Like this? Let us know!
Retrieved from "https://marvel.fandom.com/wiki/Zane_Yama_(Earth-982)?oldid=6465474"
Community content is available under CC-BY-SA unless otherwise noted.