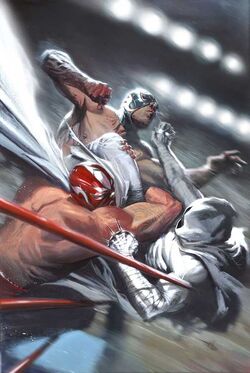 A pair of wise-cracking brothers from Mexico, they are professional luchadores as well as guns for hire. During their mercenary missions they often bicker amongst each other like young siblings often do. The two seem to have at least a minor addiction to the social networking site Facebook, and have mentioned it on several occasions. They fight with a combination of Mexican wrestling moves, as well as fire arms ranging from machine guns to RPGs. [1]

During real live fights they will tag each other in and out of battle as if they were in a wrestling ring, much to the surprise of Moon Knight, one of their first superhero opponents. When they were double-crossed by their employer, they decided to help Moon Knight by guarding Carmen Alcantara, the women he was protecting from her father. While Moon Knight was battling her father, they stole Alcantara's hoard of cash and gave enough to Moon Knight to allow him to restart his mission in the States.[2]

Recently, the Zapata Brothers took on a mercenary job in which they got involved with an idol of theirs: Deadpool. Upon their first meeting, the Brothers knocked out the Merc with a Mouth in a graveyard. When Deadpool tracked them down, they sought reconciliation and offered him a team-up. After many explosions and gunshots, the trio sat back and relaxed, as they had, according to Wilson, begun a beautiful new friendship.[3]

They love to call each other "Bro".

Retrieved from "https://marvel.fandom.com/wiki/Zapata_Brothers_(Earth-616)?oldid=5552929"
Community content is available under CC-BY-SA unless otherwise noted.