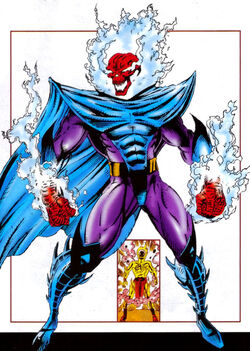 You play with the wind-- and use it to toss toys at me? I am not impressed!

Zarathos fought the ancient Spirits of Vengeance and corrupted a number of their overseers, the Blood into his "Fallen". Although he promised them increased power, in actuality Zarathos was using their powers to further augment himself.[5]

After gaining power and worshippers, Zarathos then challenged Mephisto for ownership of his realm. Mephisto tricked Zarathos with the aid of the soulless Centurious. Centurious' lack of a soul rendered him immune to many of Zarathos' power. With his followers abandoning him, Zarathos was easily defeated.[6]

On occasion, Mephisto would forcibly bond Zarathos to mortals as a mockery of the Spirits of Vengeance. On one such occasion, he bonded Zarathos to carnival stunt cyclist Johnny Blaze, transforming him into the Ghost Rider.[7] After serving as the Ghost Rider for many years, Zarathos was contained inside of mystic relic known as the Soul Chamber.[8] He was briefly released by the Beyonder in an attempt to tempt Spider-Man into allowing the death of the Kingpin.[9]

However, Zarathos appeared again, having hid inside Centurious until freed by Lilith. Joining with Lilith, they planned to take over Earth and were opposed by the Midnight Sons. The Fallen also returned to assist Zarathos. However, the destruction of the Fallen, his absorption of Ghost Rider and the powerful weapon, Justiciar all led to Zarathos' destruction.[10]

Demonic Physiology: Zarathos was a demon of uncertain classification who possessed a number of superhuman attributes: [4], to what extent all of his abilities reach are unknown but it is said that he rivals the demon lord Mephistopheles in terms of raw power.

Like this? Let us know!
Retrieved from "https://marvel.fandom.com/wiki/Zarathos_(Earth-616)?oldid=6465686"
Community content is available under CC-BY-SA unless otherwise noted.