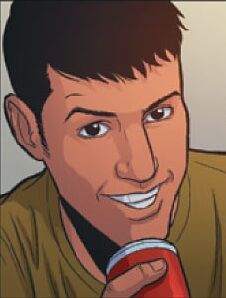 Zeeshan was one of the few post-M-Day new mutant activation since the return of Hope Summers from the future.

One night while playing Truth or Dare with two of his friends in a dorm room on University of Sheffield campus, the trio began discussing mutants and Zee disclosed his fear of becoming a freak for other to gawk at. Almost immediately afterward, Zee's powers activated causing his nose to fall off and his face to begin to melt. One of his friends, Luke, began taking pictures of him to post online and making fun of the situation. Zee quickly became distraught, and grabbing a large knife from the kitchen, he committed suicide alone in the bathroom.[1]

Hope and The Lights were alerted almost immediately of Zee's X-Gene activation by the Stepford Cuckoos, but arrived just after Zee had died.[1]

Although Zeeshan's life as a mutant was very short, his impact on the Hope and the Lights was significant.[2]

Zee is one of the few post-M-Day new mutant activation, and has displayed the following mutant powers:

This status of being a post-M-Day activated mutant gave him also the following characteristic:

Like this? Let us know!
Retrieved from "https://marvel.fandom.com/wiki/Zeeshan_(Earth-616)?oldid=5361031"
Community content is available under CC-BY-SA unless otherwise noted.