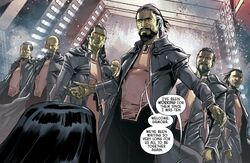 There were currently approximately 3 billion living Zen-Whoberians. Zen-Whoberians were exterminated by the Badoon. However, other than Gamora there were others survivors in form of the Vestigials, a group of Zen-Whoberian criminals exiled to Ubliex, a planet that no ship could escape because of how close it was to the black hole Singularity 105-6B. In the planet's final days Gamora came to Ubliex looking to kill L'Wit and came across the Vestigials, whose leader Divadi welcomed her as the closest family she had left. The Vestigials found the only way off the planet with the use of the Elemental and offered Gamora a seat on their ship.[6] However, in her pursuit of L'Wit Gamora had realized that her quest for revenge had consumed her, leaving her no other meaning in life. When the leader of the Vestigials left her for dead to save his own skin, Gamora saw them as being no better than Thanos and decided to abandon her only ties to the past, taking L'Wit and a few other refugees with her instead and leaving the criminals to die.[7]

Thanos once traveled 20 years into the future of Earth-7528 and found that the peaceful Zen-Whoberians had been exterminated by the Universal Church of Truth for refusing to convert to their religion. Thanos rescued an infant Gamora, the last living Zen-Whoberi and brought her back to his present of Earth-616, prior to the Zen-Whoberi massacre.[1]

In this reality the inhabitants of Zen-Whoberi were exterminated by the warlike Badoon. The last survivor, a young girl named Gamora was adopted and raised by Thanos, apparently with no time-travel involved.[8]

The species is alternatively called both "Zehoberei"[4] and "Zehobereians"[5]. In his quest to balance the Universe, Thanos conquered the planet and eliminated half of the population at random, taking the orphaned Gamora to raise as his daugher. He would later claim that in the aftermath the planet has turned to paradise,[5] although Nova Corps also claimed that Gamora is the last survivor of her people.[4]

Like this? Let us know!
Retrieved from "https://marvel.fandom.com/wiki/Zen-Whoberis?oldid=6865356"
Community content is available under CC-BY-SA unless otherwise noted.