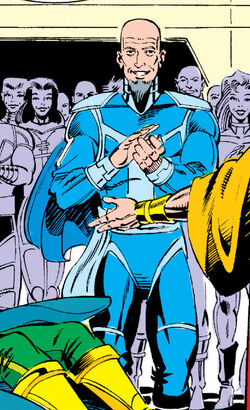 Zenn-Lavians are humanoid, and appear to have no easily discernible differences from terran humans, its people varying in roughly the same minor ethnological aspects as the people of Earth. The people of Zenn-La are extraordinarily long-lived, however, and three human generations can easily be born and die off in the time it takes a native of Zenn-La reaches his middle years. The people of Zenn-La have used their long lives to construct a virtual paradise, an ancient civilization in an eternal golden age. However, despite their cultural and technological achievements, the people of Zenn-La have become complacent over the centuries, and no longer desire to explore, innovate, or broaden their horizons. Such activity was by no means discouraged, but it was considered somewhat unnecessary.

This was not always the case, of course. For ten-thousand centuries Zenn-La was locked in a bloody Age of Warfare. The scars of this period were so deep that the people came to renounce arms forever. What followed was the hundred-century Golden Age of Reason, an era of peace, prosperity, and learning. One notable period during this greater era was the Age of Space Travel. Considered by Zenn-La's more romantic citizens to be the time of its greatest glory, Zenn-la launched numerous space faring vessels during this period. As the ancient race stretched for the stars, they brought with them colonies and supposedly civilization to numerous more primitive worlds. While many planets fell under Zenn-La's dominion, the citizenry eventually grew bored, and retreated to their home world, never to explore in any significant sense again.

This is the world into which Norrin Radd was born. Radd had always been a peculiarity among his people, being one of the rare few who was not completely content to spend his many years on his peaceful native planet. When a hungry Galactus came to Zenn-La seeking to feed off of it, the natives realized for the first time they had not faced a true threat in centuries, and had no modern concept on how to fight such a foe. Unfortunately for them, an automated weapon from the Age of Warfare, the Weapon Supreme, had detected Galactus' approach, and fired upon him. The Weapon Supreme drained energy from the planet itself, turning the entire world into a gigantic anti-matter weapon. The Great Eastern Sea was vaporized, it's coast destroyed, and much of Zenn-La was devastated by the backlash. Despite the devastation, Galactus' approach continued unabated.

Radd saw an opportunity to both save his people and get the adventure he craved. Radd offered to become Galactus' herald, constantly seeking out new worlds for him to devour if he would spare Zenn-La and protect his lover, Shalla-Bal (Zenn-La's empress). Galactus agreed, and infused Radd with the Power Cosmic, shaping him according to his childhood dreams to form him into the Silver Surfer.

Several decades later, Shalla-Bal adopted the title of the "Keeper of the Great Truth," and embarked in a journey to use the Illuminatrix to replace the culture of thousands of worlds with Zenn-La's. When she targeted the Earth, the Silver Surfer tried to stop her. When she managed to enthrall some of Earth's heroes and made them fight the Surfer, Norrin saw himself with less and less time to try to revert the Illuminatrix's conversion. As a last resort, the Surfer used all of his Power Cosmic to destroy the Illuminatrix, an action that caused all of Zenn-La's culture to be erased from the universe, including Zenn-La itself.[2]

The Zenn-Lavian males are welcome in manhood with the shaving of their heads.[3]

A kid grieving the death of a parent will be paired with another kid as companion.[4]

The Zenn-Lavians live for centuries.[5]

According to Zenn-Lavians, their culture is the most perfect in the universe, to the point it was considered unecessary to explore other worlds considering none had to offer anything Zenn-La didn't already have.[6]

When the Keeper of the Great Truth embarked in a journey to rewrite thousands of world's cultures with Zenn-La's using the Illuminatrix, the Silver Surfer was forced to hack the Illuminatrix and completely destroy the culture it was using as a template, the culture of Zenn-La.[2] Because of this, any and every element of Zenn-Lavian culture has been reduced to mere form and function.[7]

Like this? Let us know!
Retrieved from "https://marvel.fandom.com/wiki/Zenn-Lavians?oldid=6254045"
Community content is available under CC-BY-SA unless otherwise noted.