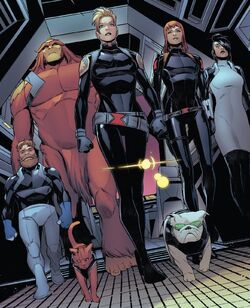 Zeta Flight was a gang of space pirates and thieves led by Corporal Carol Danvers from the cloacked Zeta Flight Station in Earth Orbit. During a preparation for a massive heist they teamed up with another pirate group led by the Widower until she turned on Zetas after suspecting that Danvers was about to backstab her team and cut them out of the loot. During this time Corporal was switched places with another Carol Danvers from an alternate universe who assumed her identity and attempted to keep the pretenses of being a ruthless pirate in front of the Zeta Flight. When Zeta Flight Station was attacked by Widower and her team in the Quinjets, but Zetas fought them off in Zeta Fighters. idower then confronted Danvers face-to-face all while Zetas were wondering about the reasons for the hostility. Widower revealed to everyone that Danvers was about to go back on their deal, shocking Zetas who up until then remained unaware of their leader's plans and they soon announced to her that they wanted their cut of the heist.[1]

However, Widowed soon confirmed that Zetas didn't steal her haul, which left only one other crew who could have done it - Ravagers led by Carol's nemesis Lord Starkill. Widower joined the Zetas in their assault on the Ravagers' asteroid hideout, but they were outmatched and everyone was captured. Starkill had the idea of selling his nemesis and her crew to the peacekeeper Thanos the Just in order to clear his own name,[2] but the the rest of the Ravagers found his plan extremely dangerous and foolhardy. Meanwhile, Zetas have also grown tired of their leader's questionable leadership of late and so the two groups sided together in a shared mutiny against their captains, deciding to deliver both of them to Thanos. Upon landing on Titan, they were taken by him to the Court of Galactic Justice. Thanos found the lives of two criminals incapable of redemption worth nothing to hand over in exchange until Rockette revealed the Reality Stone taken from Lord Starkill. Thanos then ordered every pirate seized and announced his intention to use the Stone to rid of the galaxy of all who pirate and pillage like they do. Upon hearing that, the Widower attacked attacked Thanos' forces and the other pirates joined in, helping their captains espace and also robbing the treasury on their way back to the ship.[3]

Like this? Let us know!
Retrieved from "https://marvel.fandom.com/wiki/Zeta_Flight_(Earth-TRN837)?oldid=5808612"
Community content is available under CC-BY-SA unless otherwise noted.