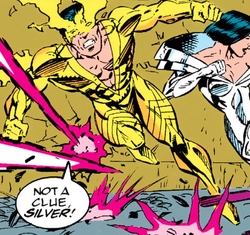 At an early age, after each manifesting mutant powers, twins Zhao and Jhimon Tang were selected by the Chinese Communist government for training in the use of their mutants abilities . Upon completion of their training, both siblings were to join China's government-sponsored super team, officially dubbed China Force. The team was to function as an internal line of Chinese defense, as well as an answer the perceived threats of the government sponsored teams in the United States, the Soviet Union, and others.[citation needed]

However, under as yet unreported circumstances, China Force was splintered by several defections, sparking Zhao and Jhimon (also called Auric and Silver, respectively) to also flee the country, into then-British Hong Kong. In Hong Kong, Silver and Auric became involved in an attempt to overthrow the government to prevent the planned absorption of Hong Kong to China. That scheme was thwarted partly due to the efforts of freelance international intelligence agent Rick Mason.[citation needed]

Silver and Auric defected to Canada, calling themselves Zhao and Jhimon Tang. The Canadian government offered them citizenship in exchange for working with Gamma Flight II, led by the second Nemesis. The twins, with the rest of Gamma Flight, fought their predecessors, Alpha Flight, although this was part of a plan by the evil Llan the Sorcerer. Once free of the Sorcerer's influence, Nemesis' Gamma Flight soon disbanded by the government in order to re-sanction Alpha Flight. Silver and Auric joined the newly created Beta Flight.[citation needed]

Shortly after joining Beta Flight, the two were kidnapped by the Sphinx, and they both died while being experimented on. The villain team known as the Chess Set hoped to auction the power-filled corpses of Silver and Auric, inviting criminals of all types to the Sphinx's base. The auction was interrupted by the hero team The New Warriors and Spider-Man, and the Sphinx's base was destroyed. In the resulting explosion, the corpses of the siblings merged with a scientist investigating the site, creating a unique, separate energy being consisting the merged consciousness of Silver, Auric, and the scientist. The being left for space and its subsequent activities remain unrevealed.[citation needed]

Like this? Let us know!
Retrieved from "https://marvel.fandom.com/wiki/Zhao_Tang_(Earth-616)?oldid=6485594"
Community content is available under CC-BY-SA unless otherwise noted.