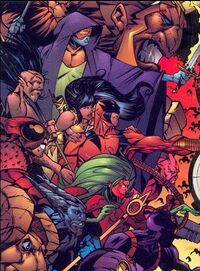 Origin
Group of mercenaries orgainzed by Scorpio and Ecliptic

This version of Zodiac seemed based on pursuing personal wealth through performing mercenary actions and acts of terrorism. The full origins and details behind the new Zodiac remain unrevealed. Their leader, another man calling himself Scorpio, wielded a weapon reminiscent of the original Zodiac Key, but its origins remain unrevealed as well. Scorpio and his team were guided by the old woman known only as Ecliptic, who had the ability to foretell the future.

In the Zodiac's first known mission in which they were hired by the Canadian government's Department H to fight the latest incarnation of their sponsored team, Alpha Flight. In doing so, Scorpio led the group in framing a militant special interest group. Alpha Flight discovered the truth and confronted the Zodiac. During the battle, the Zodiac's Virgo disappeared while fighting the Flight's Murmur. Enraged, Scorpio ordered he team to kidnap the Flight's Madison Jeffries before escaping, and he went on to sever ties with Clarke, his contact with the Canadian government. The Zodiac only returned to Department H in order to steal the powerful the Nth Projector, a device capable of allowing interdimensional travel, although the device was stolen from the Zodiac in turn by Imus Champion.

Retrieved from "https://marvel.fandom.com/wiki/Zodiac_(Ecliptic)_(Earth-616)?oldid=3677211"
Community content is available under CC-BY-SA unless otherwise noted.