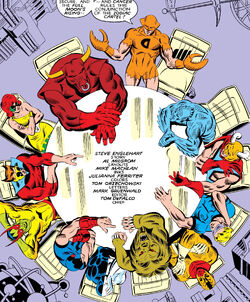 Base of Operations
Various
Affiliations

The Zodiac Cartel was founded by New York businessman and criminal Cornelius van Lunt. The Zodiac's ultimate goal was that of world economic and political domination.[1] An ardent believer in astrology, van Lunt amassed a fortune under the guidance of his personal astrologer. Van Lunt invested that fortune in the formation and outfitting of a nationwide criminal network, including a hand-picked elite group of leaders that served as the Zodiac. Van Lunt was originally the only member of the Zodiac who knew the true identities of all the other leaders, and he long concealed his own identity beneath his zodiacal persona of Taurus.[2]

Each of the twelve leaders of Zodiac was born under the sign of the zodiac after whom he or she was named, and was based in a different American city. None of the twelve leaders possessed superhuman powers, but most of them employed technology to give themselves special capabilities. Generally, the Zodiac leaders each operated independently in the city that was his or her base of operations, but they assembled for matters of collective importance. Whenever there was a vacancy in Zodiac's leadership, either by death or expulsion, the remaining members accepted applications of membership from criminals who met certain qualifications, chief among which is having been born under the zodiacal sign of the vacancy. Traditionally, all of the Zodiac leaders were male, except for Virgo.[1]

The first recorded activity an original Zodiac member was the unsuccessful attempt of the original Scorpio to assassinate Nick Fury. Scorpio wielded an ankh-shaped extra-dimensional power object called the Zodiac Key, which could fire energy bolts and teleport people and objects, even from one dimension to another.[3] A fact known only to Nick Fury was that Scorpio was actually a rouge Life-Model Decoy of his brother, Jake.[4]

When another of Scorpio's attacks on Nick Fury failed, S.H.I.E.L.D. confiscated the Zodiac Key and presumed him dead. A short time later, Nick Fury faked his own death at the hands of Hydra,[5] and he assumed the role of the second Scorpio in order to infiltrate the Zodiac, whose members were unaware of Jacob Fury's apparent demise. At this time, Zodiac was led by Aries, whose term of leadership under the rules by which Zodiac then operated, was much longer than a single month. In the guise of Scorpio, Fury captured the hero team Avengers and summoned the rest of the Zodiac to their mansion headquarters, planning to free the Avengers and have them help him capture the other eleven members. Unfortunately, the plan failed, although neither Fury nor the Avengers were seriously harmed, and the Zodiac escaped, with Aries taking possession of the Zodiac Key.[1]

Sometime later, Aries, leading a small army, succeeded in capturing Manhattan Island and sealing it off from the rest of the world with a force field. This ransom attempt was thwarted by the Avengers and the hero Daredevil. Aries died in an explosion which apparently destroyed the Key.[6] The Key was rediscovered, however, and used by the Zodiac in another crime scheme. In confronting various members of the Zodiac, Nick Fury, Daredevil, and Iron Man found themselves, along with Aquarius, Capricorn, Sagittarius, and Madame Masque, transported with the Key to the dimension from which it originated. The people were returned to Earth, but the Key was left behind.[7][8]

Van Lunt, as Taurus, assumed leadership of the Zodiac, and he recruited a new Aries and a new Scorpio. Van Lunt later embarked upon a scheme to display Zodiac's power with a so-called "Star-Blazer" device, powered by some manner of "stellar energy," to kill all the people living in Manhattan born under the sign of Gemini. However, the Avengers managed to destroy the Star-Blazer. An internal power struggle then occurred in which six of the Zodiac leaders turned against van Lunt, who induced the rebellious leaders and the Avengers into a death trap. But they survived, and the Avengers succeeded in defeating and capturing van Lunt, the Zodiac leaders loyal to him, and the dissident Zodiac leaders. The charges brought against the Zodiac leaders by the Avengers put them behind bars, but most of them have had their sentences commuted and returned to their home bases.[9]

Shortly after the capture of the Zodiac leaders by the Avengers, Darren Bentley, the original Aquarius, learned that he was dying and made a deal with the demon Slifer that enabled Bentley to take on the appearance and attributes of any of the other twelve Zodiac members. Aquarius was opposed by Ghost Rider, and ultimately died when the demon Slifer claimed his life and soul as payment.[10] The second Aries also died after being used as a host for the ionic energies of Lucifer.[11]

Months later, the Jake Fury LMD, who had in fact not died in his last defeat, rediscovered the Zodiac Key, which had been sent back to Earth. Fury again assumed the role of Scorpio, but he did not rejoin Zodiac, as his place had since been taken by a new Scorpio, Jacques LaPoint. Jacob Fury used the Zodiac Key as an energy source for his "Theater of Genetics." In this laboratory he created eleven sophisticated Life Model Decoys to serve as members of his own new Zodiac organization. Scorpio's efforts were opposed by Moon Knight and the Defenders, however, leading to the destruction of several Zodiac LMDs and Scorpio's apparent suicide.[12]

The human Zodiac organization, in the meantime, was greatly weakened in power by the capture and imprisonment of its leaders, even when most of them regained their freedom. Van Lunt, as Taurus, planned to compete in certain criminal activities with one or possibly more of the New York City-based families of the criminal organization called the Maggia. Learning of van Lunt's intentions, the Maggia somehow acquired the service of the LMD Taurus and sent it to wreak destruction at van Lunt's new base of operations. Unable to defend himself against the android, van Lunt contacted James Rhodes, then secretly operating as the hero Iron Man, to defend van Lunt's property. Although Rhodes managed to defeat the android, thereby saving his life, van Lunt regarded Iron Man as a threat to Zodiac's future plans. Deducing Rhodes' identity of Iron Man, van Lunt contacted Aries and Aquarius and assigned them to attempt to assassinate Rhodes. They failed, however, and were captured. Tony Stark alerted S.H.I.E.L.D. to the Zodiac's renewed criminal activity, but the human Zodiac remained largely out of sight in the subsequent months and years.[13]

After hearing that the Zodiac LMDs had resurfaced in battle with the Avengers, Cancer called a meeting of the Cartel to discuss what to do with their doppelgängers. Unfortunately for the humans, the Jake Fury LMD had replaced their Scorpio, and led his Zodiac LMDs in the slaughter of the remaining human Zodiac Cartel members. Taurus survived and escaped to warn the Avengers, and helped them pursue the LMDs for a time. When he betrayed his word to the Avengers, however, Taurus was hunted down by Moon Knight and eventually died in a plane crash.[14]

The only known survivor of the human Zodiac is Libra, who went on to assist Kang and the Supreme Intelligence during the Destiny War.[15]

Retrieved from "https://marvel.fandom.com/wiki/Zodiac_Cartel_(Earth-616)?oldid=5552954"
Community content is available under CC-BY-SA unless otherwise noted.