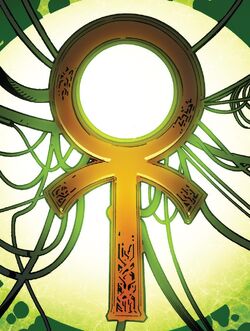 After all the battles and the bloodshed fought over this... no one in S.H.I.E.L.D. or the Avengers ever thought to ask... what a giant key is actually for.

The Zodiac Key originated in another world called the Ankh Dimension where conflict, especially between the forces of good and evil, in which neither side entirely and permanently defeats the other, is prized above all else. However, when conflict had waned there over time, a cult of beings known as the Brotherhood of Ankh created the Zodiac Key and sent it to Earth, believing that the Key would perpetuate the struggle between good and evil, as the battle was more intense on Earth than in their own world.[2]

The Zodiac Key is made of an unknown material. The holder may control vast psionic forces, enabling him or her to teleport and fire energy blasts. The key can also be used as an infinite energy source for machines. The key is capable of complicated matter manipulation as it was shown creating a restructuring LMD.[3]

The key is capable of independent thought, and will sometimes resist its user's commands, especially when they would end conflict instead of initiating it. It once restored Jake Fury's body after he was grievously wounded without being commanded to do so.[4]

After years of conflict, the Zodiac Key eventually fell into the hands of Jake Fury's grandson Vernon. Vernon's father had told him stories about the true purpose of the Key, and he set out to unlock its secrets.[5] After finding the Zodiac Grand Orrery,[6] Vernon, now under the alias of Scorpio, combined it with the Zodiac Key at the prime meridian in Greenwich, and revealed the existence of a secret passway underneath the earth. Scorpio entered the cave and opened the Zodiac Vault with the Zodiac Key, revealing a gateway to the Zodiac Dimension which thrusted a year worth of future knowedge diretly into Scorpio's mind. Spider-Man interfered and pushed Scorpio further into the gateway, causing him to vanish and be teleported a year into the future.

Once Scorpio was dealt with, S.H.I.E.L.D. retrieved the Zodiac Key.[5] Following S.H.I.E.L.D.'s dissolution, the Key fell under the protection of the Lock Box, an underwater storage facility. Once a year passed, the Key started acting up and broke out of the Lock Box on its own to reunite with Scorpio, who had just emerged from the Zodiac Vault. He took the key to the Big Ben, where his company had secretly installed a transmitter made specifically for the key to send a master code to every satellite system. Since the key was immovable and he couldn't pull it off the device, Spider-Man decided to exploit Scorpio's connection to the key. He threw Vernon off the tower, forcing the key to detach from the transmitter to rescue Fury. Once he landed safely on the ground, Scorpio was knocked out cold by Mockingbird. The key was contained by a containment field developed by Horizon University.[7]

In this reality, the Zodiac Key appeaeds in a glass case in the Broker's shop.[8]

Like this? Let us know!
Retrieved from "https://marvel.fandom.com/wiki/Zodiac_Key?oldid=6437916"
Community content is available under CC-BY-SA unless otherwise noted.