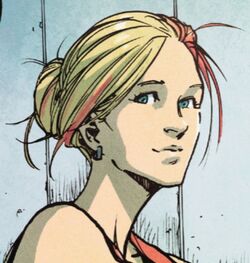 If you give a bully what they want, they'll just take more and more. I should know. I was one.

Zoe is tall, blonde, and beautiful. She was the most popular girl at Coles Academic High School, was dating a star athlete, Josh Richardson, and initially appeared shallow and "nice mean."[2] After her Terrigenesis, Zoe was the first person Ms. Marvel rescued when she fell into the Hudson River.[3]

When Captain Marvel's preemptive justice cadets arrested Josh, Zoe -- along with Bruno and Nakia -- went to their detention center to demand his freedom.[7] While speaking with Josh about why he was arrested, Zoe came out to him and confessed that she had a crush on Nakia.[8]

For months, Zoe wrote romantic texts to Nakia, but was careful to always delete every message before sending them. Unfortunately, Zoe never cleared her deleted messages folder on her phone, a fact that a sentient virus called Doc.X sought to exploit. Ms. Marvel visited Zoe to warn her that Doc.X intended to expose her crush on Nakia unless Ms. Marvel could defeat him soon, which was looking unlikely. Zoe met with Nakia and finally told her the truth about her feelings. Nakia told Zoe that she did not return the sentiment, but still cared for her friend and vowed to stand with her no matter what.[9]

Like this? Let us know!
Retrieved from "https://marvel.fandom.com/wiki/Zoe_Zimmer_(Earth-616)?oldid=5668763"
Community content is available under CC-BY-SA unless otherwise noted.