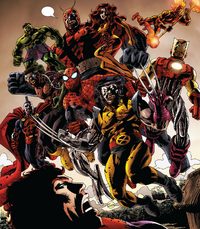 Base of Operations
Generally mobile throughout the universe in search of suitable planets to consume.
Affiliations

Enemies
Anyone uninfected by the zombie contagion, or anyone that gets between them and a feed.
Origin

Origin
After a Zombie Contagion infects the Earth of this reality, the planet is decimated by the zombified meta-humans. When Galactus appears, to consume the planet, the zombified Giant Man, Hulk, Iron Man, Luke Cage, Spider-Man, and Wolverine instead consume him and absorb some of his powers, taking his place as The Devourer.

When a Zombie Contagion infects the Earth of this reality, the first wave of casualties are the Avengers as they investigate the first zombie, resulting in the newly zombified super-heroes eating the human population. When the Silver Surfer arrives to herald the coming of Galactus, the zombified meta-humans see an increasingly rare opportunity to feed, and after all others have failed to hurt the Surfer, Hulk steps in and bites his head off. Luke Cage, Wolverine, and Colonel America, begin to feed on the body until the other zombies present gather to feed as well. Unfortunately, before the rest can eat, Giant Man picks the decapitated Herald’s body and shares it between himself, Iron Man, and Spider-Man. When Beast complains to Colonel America that none of the others got a bite, the ex-president gestures at him, and inadvertently takes his face off with Power Cosmic that he has somehow obtained after eating the Silver Surfer.

The seven Zombies decide that if other zombies taste bad when they are fresh, perhaps they taste better cooked. They proceed to attack and kill the other zombified meta-humans around them. Unfortunately, they still taste bad, leaving them in the same position as before.

When Galactus himself appears, they attack him with their Power Cosmic; however, they are not strong enough to defeat him, and so make a tactical withdrawal to come up with a plan. The plan consists of building a super-gun which combines all of their individual Power Cosmics into one extra powerful beam. Upon successfully constructing the weapon, the Zombies set off to find Galactus again. When they find him, they see that zombified versions of their enemies are making a determined, but futile, effort to bring down the Devourer themselves.

It only takes a few shots from their new super-weapon to bring down Galactus, and as he lays there, the Super-Villains, and Super-Heroes fight over which group is to consume the body. The zombified heroes have an obvious upper hand with the Power Cosmic, and kill the greater numbers of the villains with relative ease, but not before Red Skull dips his hand into Colonel America’s partially removed cranium, and scoops his remaining brains out, killing him.

It turns out that Galactus isn’t in fact dead; he was merely stunned, and begins to get up, but the remaining zombies fall on him and eat him alive. They absorb some of his powers through eating him, and presumably take his place as the Devourer of Worlds. The next time they are seen, they are descending from an alien sky, wearing customized versions of Galactus’ costume, after teleporting to another world to consume the inhabitants and, if they have taken the Galactus’ place, the world itself.[1]

Forty years after leaving Earth, the cosmic powered-zombies have systematically devoured all other life in the universe, as well as infecting the Titan Thanos (who is killed shortly thereafter by the Hulk after squabbling over food), the mutant Phoenix, Shi'ar warrior Gladiator and former Herald of Galactus Firelord with the zombie plague. They then decide to return to Earth and rebuild the interdimensional portal that Magneto destroyed forty years ago. In route to Earth, they feast on Ego the Living Planet to ease their hunger.

On Earth, an elderly Black Panther rules the surviving humans in New Wakanda (in the ruins of New York), but is at war with the Acolytes, led by Fabian Cortez's son, Malcolm. The Panther's grandson accidentally discovers the severed head of Hawkeye, who has gone mad and amnesiac from decades of being alone and unable to move. One of Cortez's assassins attacks the Panther in his sleep and fatally wounds him, but the Panther is saved from death by the Wasp when she infects him, leaving him a zombie. After devouring the assassin, the two struggle with how to manage their hunger, while the cosmic zombies continue their approach to Earth.

Cortez decides to have the Panther executed after he has Wasp and Hawkeye exterminated, but the execution is delayed by the arrival of the returning Cosmic Zombies. Giant Man wishes to start a "breeding program" to create more human food, but a battle then ensues in which Spider-Man and Luke Cage switch sides, knowing what they have done is wrong now that their hunger has subsided enough to allow them to think rationally. The Hulk reverts to Bruce Banner and is captured.

After killing Gladiator, the human resistance drives off the remaining zombies and restore Luke Cage and Spider-Man's lost limbs with cybernetics. Spider-Man then reveals that the other zombies seek the dimensional teleporter, which Forge reveals he has stored in their base. Knowing that the zombies will not depart without the device, the heroes prepare for the next battle. It is then revealed that the Black Panther's deceased son, T'Channa, has been revived with a portion of Colonel America's brain inside of him. During the next battle, Iron Man breaches the compound and battles Forge, T'Chana and several Acolytes. Just as the cosmic zombies gain the upper hand and prepare to feast on the remaining humans, Giant Man is surprised to realize that he has lost his hunger.

Giant Man then convinces the zombies that their hunger is in fact gone, and while he is successful, they are interrupted by an enraged and starving Hulk. The Hulk destroys several of the zombies (Phoenix, Firelord, Hawkeye and Iron Man) as they attempt to stop him from eating the remaining humans. Robert Reynolds, having fallen in love with Wasp and believing her to be dead, offers himself to be devoured by the Hulk to stop the Hulk's rampage. The Hulk consumes Reynolds and then reverts back to Banner, who requests to be killed by the survivors to prevent the Hulk from ever returning. New Wakanda is rebuilt, and Cortez then uses the teleporter to transport away the last of the zombies, intending to seize power for himself.[2]

In Earth-Z, the new reality they were teletrasported to, they all appeared in separate locations and the hunger returned. Giant Man, who appeared at the Blue Area of the Moon, decided to use Uatu's technology to get to other dimensions after devouring him. However, all the other Zombies tried to oppose him (except for Wolverine, who was killed by his counterpart). In the end, they were all killed, except for Spider-Man, who was leading the New Avengers while Hank leaded the Avengers. Spider-Man revealed he infused Earth-Z's Sandman with Stark's nanobots that consume damaged flesh and multiply on their own. Has all the Zombies were consumed by the nanobots, Spider-Man thanked Sandman for avenging Aunt May and Mary Jane's deaths. Uatu reappeared and reaveled he couldn't be dovoured or consumed. By observing these events, he came up with the Idea to send the Zombie Sentry, the last zombie remaining, back in time to Earth-2149 so this infection could start over and prevent it to reach any other dimension.[3]

Transportation: The Zombie Galacti simply teleport to different parts of the universe.

Retrieved from "https://marvel.fandom.com/wiki/Zombies_(Earth-2149)?oldid=5645616"
Community content is available under CC-BY-SA unless otherwise noted.