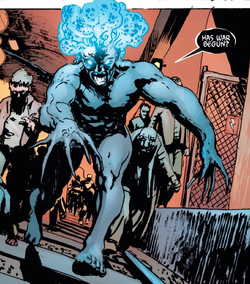 Huntsman belonged to the latest generation of living weapons created by Weapon Plus Program, and was designated Weapon XII. Like Fantomex (Weapon XIII) he was born and artificially "evolved" in The World, a man-made environment designed to create Super-Soldiers using Sentinel technology. He was intended to be one of the Super-Sentinels, a team of mutant hunters conceived by John Sublime as a publicity stunt to make the extermination of mutants acceptable to the public.[citation needed]

Huntsman, alongside Fantomex, was transported from England to France via the Euro Tunnel. However, a fake train wreck set up by Weapon Plus itself released both Fantomex and Huntsman from their containment capsules, while also trapping 120 passengers, 30 asylum-seekers and numerous animals within the Tunnel. Members of the X-Corporation Paris were dispatched to deal with the accident.[citation needed]

While Darkstar, Siryn, Multiple Man, M, Rictor and Cannonball were overwhelmed fighting Huntsman's possessed victims, Phoenix and Professor X were recruited by Fantomex in exchange for information on Weapon Plus.

Professor X and Phoenix arrived to find the X-Corp members nearly defeated, with Siryn injured and Rictor, immune to Huntsman's infection, saved by Madrox. Phoenix's telekinetic powers were useless against Huntsman's. Professor X took over the mind of Madrox in order to create an army of mind-controlled duplicates to counter Huntsman's own army. Meanwhile, Fantomex shot his way through Huntsman's victims, including Darkstar herself, in order to reach the train that contained Huntsman's kill switch. Fantomex activated the kill switch, killing not only Huntsman but also all those whose minds were infected.[citation needed]

When the military arrived, they eliminated all evidence of an anti-mutant conspiracy.[citation needed]

Huntsman possessed a viral, hive-mind consciousness that caused anyone he touched to take on his mindset and drives. As Fantomex put it, he turns his enemies into himself.

Huntsman was implanted with a fail-safe device allowing his handlers to kill him instantly if necessary.

Like this? Let us know!
Retrieved from "https://marvel.fandom.com/wiki/Zona_Cluster-6_(Earth-616)?oldid=6485574"
Community content is available under CC-BY-SA unless otherwise noted.