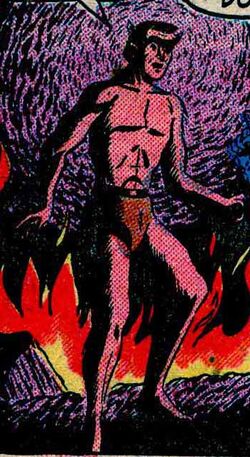 Zoroba was a demon who lived in the netherworld of Hades. In 1950, during a period in which Hades was briefly ruled by Asgardian trickster god Loki, Zoroba was approached by the Olympian god Apollo who sought a means to go to Earth without Jupiter knowing. To this end, Apollo and Zoroba made a deal that Zoroba would return to Olympus possessing Apollo's body while Apollo's spirit went to Earth to try and win back the heart of Venus.

Posing as Apollo, Zoroba then summoned Loki and brought him to Olympus. Then he confronted Jupiter and attempted to convince him to let Loki stay on Olympus or face an invasion from the forces of Hades. Jupiter needed time to discuss it with his council but correctly deduced that "Apollo" was nothing more than an impostor. He then contacted Venus who was at he time trying to deal with Apollo, who had possessed the body of her co-worker Marvin Klee at Beauty Magazine. Realizing what was going on, and knowing that Apollo was trapped on Earth so long as Zoroba possessed his body, Venus return to Olympus. There she used her love powers to seduce Zoroba and trick him into returning with her to Earth, freeing Apollo's form. Venus then convinced a police officer that Zoroba was a Communist spy and had him arrested.

Zoroba found himself in a mortal jail until Apollo arrived to return him to Hades. His subsequent fate is unknown.

The full extent of Zoroba's demonic powers is unknown. He has shown the ability to possess the body of a god, but this appears to only work if the host is willing to relinquish their body over to him.

Like this? Let us know!
Retrieved from "https://marvel.fandom.com/wiki/Zoroba_(Earth-616)?oldid=5438964"
Community content is available under CC-BY-SA unless otherwise noted.