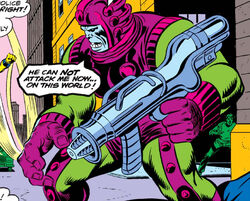 Zorr was a luphomoid who destroyed the planet Xandar, Xandar's 4 largest cities survived thanks to the help of Uatu the Watcher. The Luphomoids' home world was destroyed by Galactus. The only survivors were those few Luphomoids who were off-planet conquering other worlds such as Zorr and his brother Kraa. Zorr fatally wounded Nova Prime Rhomann Dey. Rhomann Dey's last act was to select Richard Rider aka Nova as his replacement. Nova fought Zorr but Zorr was destroyed by a beam from Rhomann Dey's spaceship.[3]

Nova fought Zorr's brother Kraa who had built a reputation out of slaughtering members of the Nova Corps. Nova was attacked by Nebula who claimed to be Zorr's daughter. Nebula's claim may be dubious as she had in separate incidents claimed to have killed her father and that her grandfather was Thanos of Titan. Zorr's sister Xira later worked with Nebula during the Annihilation Wave.

Like this? Let us know!
Retrieved from "https://marvel.fandom.com/wiki/Zorr_(Luphomoid)_(Earth-616)?oldid=5837872"
Community content is available under CC-BY-SA unless otherwise noted.