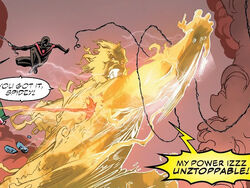 Zzzax was the product of an accident that occurred at a Consolidated Edison nuclear power plant when a group of heavily armed terrorists attempted to shut down the power for New York City. The explosion that their stray gunfire caused started a chain reaction in the atomic reactor, creating a psionically charged electromagnetic field of humanoid form. As the electromagnetic form grew, it incinerated those people who stood in its way, absorbing the electro-psionic fields generated by their brains, and thus acquired a human intelligence. As it began to think and become aware of its surroundings, it developed rudimentary speech and named itself Zzzax in imitation of the electrostatic "crackle" it made when it moved. As it killed more human beings, it grew more intelligent; consequently it began a campaign of murder and destruction in order to increase its intelligence further. Zzzax clashed with both the Hulk and Hawkeye. Zzzax short-circuited and its constituent field dissipated when Hawkeye shot an arrow attached to a long conducting wire through Zzzax into the East River.[citation needed]

Zzzax reformed months later as a result of a mistake in a scientific experiment performed by Soul Star Research, a group of three scientists, Massachusetts Institute of Technology graduates Mark Revel, Stan Landers, and Alexandria Knox, who developed a mechanism that was allegedly capable of collecting and recording the scattered electrical brain waves of any human being who had ever existed. When first used, the machine made contact with an unusually intense field of electro-psionic energy in the upper stratosphere, which was the residue of Zzzax. The collected electrical impulses formed a field of sufficient energy to explode the machine's titanium casing, and Zzzax reformed. Stan Landers was killed by Zzzax as the creature absorbed his electro-psionic energy. As a result of this absorption, Zzzax found itself influenced by Landers' intense love for his colleague Alexandria Knox, and abducted her. Once again Zzzax battled the Hulk. Soul Star's Mark Revel short-circuited and dissipated Zzzax by shooting a sufficient length of copper wire through it from a helicopter and then flying the helicopter, which still held one end of the wire, directly into a thunderstorm in which the helicopter was struck by lightning.[1]

Later, when Stark International constructed a laboratory for Dr. Bruce Banner (who was also the Hulk), the company made the mistake of purchasing a central power core from the now-defunct Soul Star Research. When the generator was hooked up, a sudden surge of electromagnetic discharge brought Zzzax back into existence. The mechanics of this reemergence of Zzzax have never adequately been explained; presumably a portion of Zzzax's electro-psionic field lay dormant in this device which powered Soul Star's previous experiment. After a brief battle the Hulk, who at that point retained Bruce Banner's intelligence when in his superhumanly strong form, ran power cables through Zzzax which were connected to a generator which drew its power from stellar and quasi-stellar sources. The Hulk reversed the generator's polarity, sending Zzzax out into space.[citation needed]

Zzzax reappeared, emerging from high voltage lines connected to a California nuclear power plant. Exactly how Zzzax reformed this time is unknown, but its recreation is probably at least in part the work of Franklin Hall, who sought Zzzax as an ally. On Hawkeye's suggestion Wonder Man uprooted a water main, which the latter then used to fire a torrent of water at Zzzax. Hawkeye then shot an arrow carrying a conducting wire through Zzzax into the water upon which Zzzax was standing. As a result Zzzax was grounded and its field was disrupted.[citation needed]

Somehow Zzzax was imprisoned by S.H.I.E.L.D. soon after Hawkeye and Wonder Man defeated it. SHIELD kept Zzzax, which was still in humanoid form, confined within a large insulated vacuum tube, and then transferred it into another such tube at Gamma Base, New Mexico. There former General "Thunderbolt" Ross, who was obsessed with a desire to destroy the Hulk, submitted to a SHIELD experiment to transform him into a superhuman being by infusing some of Zzzax's "living electricity" into Ross's body. But the experiment went awry, and Ross's psychic energy--his mind, in effect--was absorbed by Zzzax, and Zzzax broke free. But, strangely, Ross's mind, perhaps because of the strength of its hatred for the Hulk, took control of Zzzax, submerging Zzzax's own personality. Meanwhile, Ross' original physical body remained alive, but all of that body's independent thought processes had ceased; only involuntary functions of the nervous system (such as those controlling the heartbeat) continued.[citation needed]

Eventually, Ross's mind returned to his original physical body, bringing much of Zzzax's living electricity with it. But now a new menace had come to Gamma Base: a grotesque mutant (The Nevermind), which seized upon the heads of humans victims and drained life-energy from their bodies, killing them. Ross watched as Rick Jones, in his Hulk-like form, tried unsuccessfully to defeat the mutant, which menaced Betty. Then, to save Betty, Bruce Banner hurled himself into the mutant's path, and thereby himself became the mutant's victim. On seeing the Hulk's bravery and Bruce Banner's self-sacrifice, Ross realized that he had gravely misjudged them both. The mutant rendered Bruce Banner unconscious without draining him of all his life energy, and then headed towards Betty. This time, Thaddeus Ross hurled himself into the mutant's path, and the creature took hold of his head. But since Ross still possessed much of Zzzax's electrical energy, the mutant could not take control of Ross's mind, and Ross released all of Zzzax's energy, electrocuting the mutant. Zzzax has since returned, however.[citation needed]

Zzzax was an "electromagnetic intelligence," a psionically-charged electromagnetic field which had a humanoid form and which was capable of crude human level intelligence and superhuman strength. Zzzax generally appeared as a gargantuan mass of electrical "sparks" in humanoid form. It was highly luminescent, whitish-yellow in color, and gave off the smell of ozone. Zzzax could hover or fly in the air.[citation needed]

Zzzax could fire extraordinarily powerful blasts of electricity. Zzzax's tremendously high voltage enabled it to incinerate matter which lied in its path. Zzzax's superhuman strength enabled him to battle the Hulk nearly to a standstill. Zzzax incinerated whole city blocks in minutes. Zzzax burned the Hulk's skin to a slight degree. At its most powerful, Zzzax was forty feet tall and carried a voltage of several hundred thousand volts that could be almost totally expended over a twenty minute period.[citation needed]

Zzzax subsisted by drawing all available electromagnetic fields into its own. Those electromagnetic fields housed by human brains, when absorbed, added to Zzzax's level of stored psionic energy, making it more intelligent. For an unknown reason Zzzax found this absorption of electrical/psionic energy from human brains pleasurable, and therefore undertook the murder of human beings for their psionic energy whenever possible, In absorbing this psionic energy from a human victim, Zzzax would incinerate the victim's body, Zzzax was seemingly unable to absorb psionic energy from its recurring adversary, the Hulk. However, Zzzax could take control of the electrical/psionic impulses in the Hulk's nervous system, and thereby control the activities of the Hulk's muscles.[citation needed]

Zzzax's own thoughts and behavior could be influenced by strong desires on the part of the human beings whose psionic energy it had consumed. However, only in the case of Thunderbolt Ross had another being's consciousness supplanted Zzzax's own as the dominant one controlling Zzzax's physical form.[citation needed]

Electro-Physiology: Zzzax is a creature of pure electricity (or to be more precise a psionically charged electromagnetic field in humanoid form). It can generate electricity (usually in the form of lightning bolts), manipulate nearby electrical fields, and fly. Zzzax absorbs electricity from the human brain to survive; this usually kills its victims, and usually gives Zzzax temporary personality traits similar to those of the person it has absorbed. Only his foe the Hulk has proven immune to this ability.[citation needed]

Although Zzzax is a being composed of energy, what passes as its corporeal form is able to lift matter as a normal humanoid body (as though it had hands, muscles, and a skeletal structure). Zzzax possesses the ability to lift in excess of 100 tons or more based on its level of energy it has absorbed at the time. Zzzax has nearly limitless stamina and durability due to the quasi-physical nature of its body. It is capable of hovering its body in the air, but it does not achieve a velocity any faster than that of an ordinary human of its size who was running or walking at the same speed on level ground.[citation needed]

When the energy that composes Zzzax's quasi-physical body is dispersed or nullified it somehow always reforms itself. Zzzax is extremely difficult to restrain or damage.[citation needed]

Like this? Let us know!
Retrieved from "https://marvel.fandom.com/wiki/Zzzax_(Earth-616)?oldid=6465471"
Community content is available under CC-BY-SA unless otherwise noted.